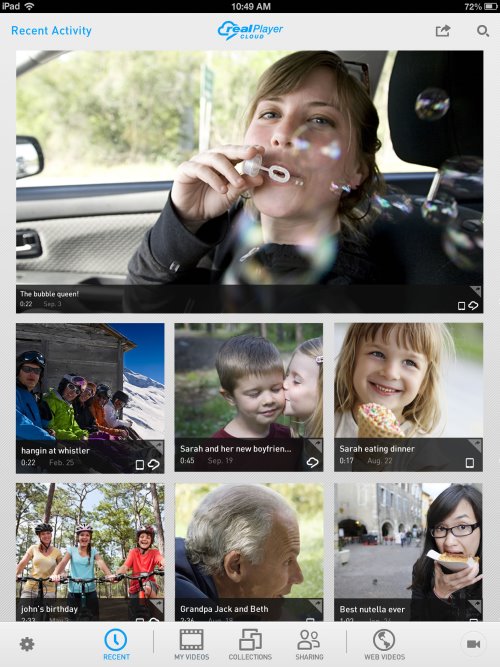 Long before the instant streaming of high-definition video became the norm on the web, there was RealNetworks’ RealPlayer. The videos were blurry, choppy, and took forever to load on a blazing 56k modem — but they had actual moving pictures, beamed down from the Internet. It was tough to tell at the time, but those tiny videos we were squinting at were a window into the future.

Today, years after RealNetworks‘ relevancy has seemingly dwindled away, it’s once again aiming to reinvent the way we watch videos online with RealPlayer Cloud, a new service that you use to upload video files to the company’s servers, instantly access them across all of your devices, and share them with your friends. This time, instead of just giving you a way to view video on the web, RealNetworks wants to be the central hub for all of your personal videos.

“Sometimes the best ideas are about simplifying complexity. That’s what we’ve tried to do,” Jeff Chasen, RealNetworks’ vice president of product development, told me in a recent interview.

Plenty of services upload videos online, either for viewing on the web like YouTube or storage like DropBox, but Chasen says RealPlayer Cloud is unique in its capability to instantly convert videos to play properly on multiple devices. That takes much of the headache away from managing your video library, and it also makes it easier to share it with others.

RealPlayer Cloud apps are available free today on iPhone, iPad, Android, Windows PCs, and Roku. (Just about any other platform with a web browser can also log in to the RealPlayer Cloud site to stream video.) You get 2GB of storage for free, with additional storage starting at $4.99 a month. Subscription plans also unlock better video quality and streaming options.

While RealPlayer isn’t as essential as it used to be, Chasen says it still has more than 23 million monthly active users. Additionally, people download millions of YouTube videos every day using the company’s RealDownloader plugin.

Behind the scenes, RealNetworks’ SurePlay technology converts every video you upload into multiple formats and quality levels. Showing off the technology in my office, Chasen shot a video on his iPad, uploaded it to RealPlayer Cloud, and had the file appear on his Android phone and Roku set-top box (the company’s first partner on the TV side) within 10 seconds. My own testing between my Android phone and Windows 7 desktop showed similar speeds. Once your videos are in RealPlayer Cloud, you can also download them for offline viewing on your mobile devices and computers.

RealPlayer Cloud also opens up the capability to stream videos directly from some of your devices without even uploading it to the cloud. For example, you could stream a DRM-free (and perfectly legal) episode of Game of Thrones from your desktop to your Android phone. You can also access music and photos from other devices.

“We’re committed to making video easy to use. … Video is the one [media type] people are struggling with — creating another photo service, what’s the point?” Chasen said.

In my IT days, I spent more hours than I can count dealing with the spammy software that used to come with RealPlayer, a desperate tactic that gave the company a bad reputation in the mid-2000s. Chasen says those days are in the past: “Any of that perception of the brand was many years ago. We learned very quickly that we needed to make stuff that was great for consumers. … We quickly fixed that. Now that we have a great product and concept, if you look back at the last five or six years, none of those complaints have been happening.”

While the tech behind RealPlayer Cloud is solid, it remains to be seen if people actually want to manage their videos like this anymore. Most people upload videos to YouTube or Facebook if they want to share them with friends, and while having access to videos on all your devices is a dream for geeks, I’m not sure normal users would adopt a new service just for that purpose.

Like the RealPlayer videos of the ’90s, the future of RealPlayer Cloud is fuzzy and hard to make out. But I have a feeling there’s something important there.