File-sharing startup Egnyte is operating in a crowded market, going against players like Box and Dropbox. But chief executive Vineet Jain sees this as a sign that his company is in the right sector at the right time — and is poised for success.

Egnyte’s team introduced a new logo and overhauled the website this morning to appeal to a new audience. The company has traditionally targeted small and midsized businesses with its hybrid storage product.

To boost annual revenues, the company is now selling its software to large enterprises. The company today boasts about one million paid customers, and large firms like Ikea use its software. Unlike Dropbox and Box, Egnyte doesn’t offer free storage space for consumers — the company focuses on businesses. 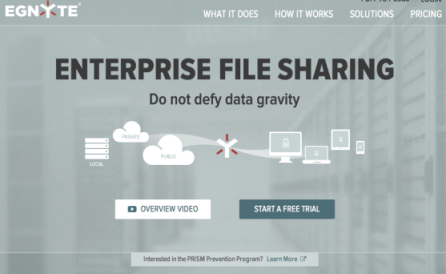 Above: Egnyte’s new website is designed to appeal to large enterprises.

For Jain, the “hybrid” approach is what separates Egnyte from its strong competition. Box focuses on the cloud, but Egnyte can help customers store and share data that is kept inside the firewall and in the cloud.

“Companies only entrust the cloud with about ten percent of their data,” said Jain. Hence, Box chief executive Aaron Levie’s Twitter profile contains the phrase “Go ☁,” while Jain can be reached “@cloudnotenough.”

Related: The real reason that Box is such a threat? It’s not what you’d expect.

Jain believes that more companies are waking up to the benefits of the cloud — but are concerned about security. So Egnyte is working to help some of its largest customers safety migrate some of this sensitive data to the cloud. This process traditionally takes up to a year. The new website also contains a “PRISM prevention program,” with information about how customers can keep files on lock down — even if the NSA comes knocking.

Moreover, a new service, called Storage Connect, is solving the “accessibility problem,” according to Jain. Storage Connect can help customers move that data securely and gradually.

With Storage Connect, employees can access a green, yellow or potentially even red file from any mobile device, browser or desktop. This file can be edited if an individual employee has permission from IT. Storage Connect allows employees to edit and access these files from anywhere, without having data or metadata pass through the cloud.

Jain’s favorite example to illustrate his thinking is the idea of the “paperless office.” Analysts and the press had expected that new software would replace paper entirely — but that hasn’t happened.

“A lot of stuff gets printed,” said Jain. “File storage will evolve in the same way — more and more in the cloud, but a significant portion on-premise.”

In the months leading up to the rebrand, Egnyte has beefed up its marketing team, with hires from enterprise giants like VMware and EMC.  Jain is hoping to raise Egnyte’s profile so it can compete for huge contracts with Microsoft and rising stars like Box. So if you haven’t heard of Egnyte, you soon will.

The company makes about $25 million annually — Jail expects to see revenues skyrocket in the next few years, in anticipation of a public offering in 2015.