Game retail has been in the crosshairs of digital distributors and cloud gaming services, but GameStop remains the king of selling games in its thousands of physical stores.

We’ll talk about that and the evolutionary role of retailers with Tony Bartel [right], the president of the world’s biggest game store chain, at our upcoming GamesBeat 2013 conference on Oct. 29-Oct. 30 at the Hotel Sofitel in Redwood City, Calif.

Think retail doesn’t matter? Well, look at the $1 billion in sales of Grand Theft Auto V in three days and all of the midnight store openings for the big game’s launch. GameStop is changing with the times, and it’s no longer just a bricks-and-mortar company. GameStop plays a hybrid role with multiple channels in mobile, digital, and physical stores. 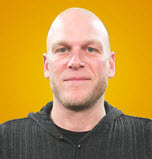 The session will be moderated by Adam Sessler [left], a longtime video game TV personality and executive producer of Rev3 Games at Revision3. Sessler has been covering the game industry for more than 14 years on TV and the Internet. He is known for his outspoken opinions and irreverent wit.

Here are the rest of our announced speakers for the event:

Our theme for the conference is the “Battle Royal,” where all game companies compete across platforms, territories, digital and physical markets, and categories of games.

We’ve entered an era where many varied companies are competing for gamers’ time in the same space. Apple and Google want to get in the living room and are waging war against Nintendo and Sony. Microsoft already has an edge in living room entertainment with its Xbox Live service, but it wants a piece of mobile as well. It’s a confusing time for gamemakers. Where should they take their games? What platforms will provide the best gaming experiences? Who will make them the most money?

We’ll roll out a steady drumbeat of speakers as we get closer to GamesBeat 2013′s October date. We expect to have more than 80 of the gaming industry’s best lined up from our fifth annual event.

Each year, GamesBeat follows a big trend. In 2009, we focused on how “All The World’s a Game,” with the explosion of games on the global stage. In 2010, GamesBeat@GDC focused on “Disruption 2.0.” In 2011, our theme was “Mobile Games Level Up,” investigating the busy intersection of games and mobile technology. In 2012, we explored “The Crossover Era,” defined by the time when so many big game companies and startups were transforming themselves by expanding from one market to the next.

Thanks to the following industry leaders for supporting GamesBeat 2013 as sponsors: Ad2Games, AppLift, NativeX, Renren Games, and Tapjoy as Gold Sponsors; Flurry, Kontagent, Playnomics and LifeStreet Media as Silver Sponsors; AppFlood and Slashdot as Event Sponsors; Akamon Entertainment and Arkadium as contributing sponsors. If you’d like to be a sponsor, please send a message to sponsors@venturebeat.com.