Today JUSP launched the Europe’s answer to the Square credit card reader in Milan, Italy. Like Square, this credit and debit card reader connects to any phone or tablet simply via your device’s headphone jack. But the company has plans not just for Europe, but also for Africa, Latin America, and parts of Asia that don’t have a developed point of sale infrastructure yet.

“It’s the same service that Square is offering in the U.S.,” JUSP chief executive Stefano Calderano told me yesterday from Milan, where he spends half his time, commuting from his home in Rome. “But magstripe is not used anymore in Europe for credit card/debit card — it’s all chip and pin. So the technology is much more complicated, and the device is not as small and as cheap as Square.” 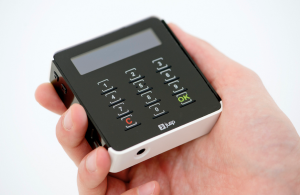 JUSP’s device, also called the JUSP, is a small box with numbers on the front. Connect it with your iPhone or Android device, insert a credit card into it, and you can take payments from anyone, anywhere.

It costs 39 Euros, which is cheap compared to competing products at 100 Euros but expensive compared to Square — which is free. The cost, Calderano says, is a good thing, however.

“When merchants actually buy the device, maybe we won’t have so big numbers in terms of number of stores, but there will be more incentive to use the device,” he argues. “For Square, many are not using the dongle anymore … if you look at the number of customers Square declares and the volume of transactions, I would guess that hundreds of thousands of customers are just not using the technology anymore.”

That’s probably debatable — Square would certainly have a different story — since Square is now funneling an annualized $15 billion in transactions. But there is something to the idea that a certain cost will require a merchant makes it worthwhile.

That cost covers the added complication, certainly, in securely managing the chip and pin security features common in Europe, Canada, and many other countries around the world. But there’s also complication — with a purpose — in the way JUSP communicates with a retailer’s smartphone or tablet: via the audio jack. 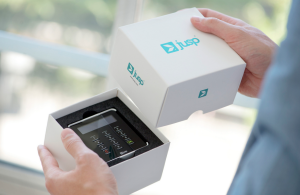 The company took a very different stance than most of its competitors in using the audio jack, Calderano says, because the Bluetooth technology most mobile POS (point of sale) systems use in Europe is trouble-prone, and results in device separation that is more similar to a traditional POS than a mobile POS.

But there’s one other very important reason — and it’s not in Europe.

The primary market, of course, today, is Europe. But even there, JUSP has different ideas.

Typically, mobile point of sale solutions are designed for small merchants, street vendors, or home-based businesses. JUSP, however, sees an enterprise market, and is talking to large corporate customers, Fedex Europe, and companies with remote sales forces — many of whom, these days, aren’t even employees. In those scenarios, mobile payments are a major benefit.

“In 5 years, 50 percent of POS machines will be mobile,” Calderano says.

The JUSP is available in Europe now, and, the company says, will take on the U.S. market too, starting in 2015 when chip and pin technology has become widespread here.