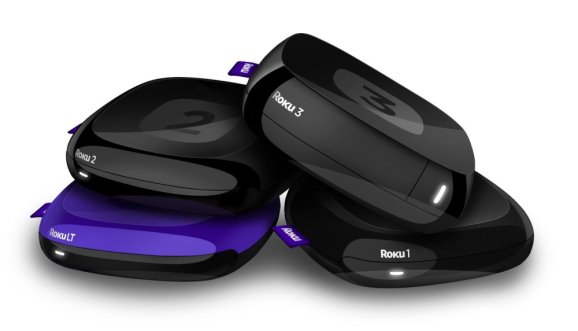 Now there are finally some updated low-end and mid-range Roku devices to join the company’s flagship Roku 3 box.

Roku today announced the new Roku LT ($50), Roku 1 ($60), and Roku 2 ($80), which all sport a similar design (and a few features) from the $100 Roku 3. The Roku 2, for example, now includes a remote with a headphone jack, one of the most useful features from its elder sibling. Otherwise, the devices are your standard refresh over last year’s models.

Additionally, Roku will now offer movie and TV show rentals right from its devices’ home screens, thanks to a new partnership with video service M-Go. Existing Roku devices will get a software update to highlight the new M-Go integration, while the new devices will ship with the functionality (and will include M-Go buttons on their remotes).

While it may seem like overkill that Roku is still offering four different device options, Roku’s director of product management, Lloyd Klarke, tells me the company is still seeing a decent amount of purchase distribution between them. “We wouldn’t make four products if they weren’t selling,” he said.

That may be, but the company’s offerings still seem needlessly complicated. Now the only thing separating the Roku 1 and Roku 2 is the latter’s headphone jack-equipped remote. For most consumers, the real choice is between the Roku 1 and Roku 3 — the former is the cheapest way to get 1080p HD streaming video, and the latter packs in all of Roku’s latest tech, including a motion-sensing remote.

Similarly, the company’s decision to implement M-Go’s media offering seems a bit confusing since it sits alongside Vudu and Amazon’s streaming services. Roku doesn’t try to hide the competition either: When you select a movie or show from the home screen, you can easily choose between all of the services that offer it.

Roku says it has more than 1,000 channels available on its set top boxes, including the surprising addition of Time Warner Cable earlier this year. While most cable operators view Roku’s devices as a threat, Time Warner lets its customers access more than 300 streaming channels over its Roku app. That’s the sort of thing we can expect to see more of on Roku’s gadgets, as well as other streaming devices.

“If you look at the entire [streaming device] marketplace right now, it’s essentially us and Apple TV. … We remain focused on things that make a big difference to customers,” Klarke said.