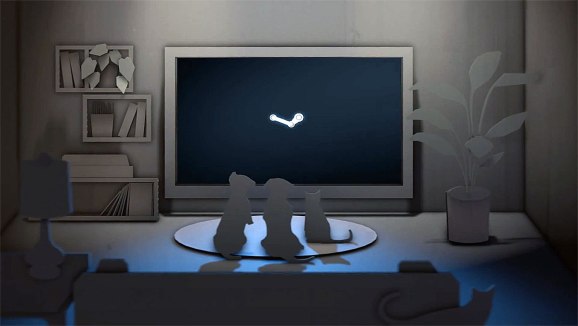 Valve's Steam in the living room.

Valve has revealed the Steam Box, now known as Steam Machines, in an effort to take over so-called living room gaming.

Steam Machines are “a powerful new category of living room hardware,” according to the company. It is planning a hardware beta for this year. In 2014, a variety of vendors will release many different set-top boxes under the Steam Machine brand.

Valve, a developer and digital-game distributor, will first make its own version of the hardware as a guideline for others.

“While these products are still in development, we need your help,” reads Valve’s announcement. “As always, we believe the best way to ensure that the right products are getting made is to let people try them out and then make changes as we go. We have designed a high-performance prototype that’s optimized for gaming, for the living room, and for Steam. Of course, it’s also completely upgradable and open.”

This year Valve will ship 300 of these boxes to Steam users, free of charge, for testing.

Valve is one of the biggest names in digital distribution for PC gaming. Its Steam service produces millions in revenue for the company by selling its and third-party titles to PC gamers.

After dominating desktop and laptop computers, Valve is eyeing the living room for the next Steam invasion.

On Monday, Valve announced SteamOS, its new Linux-based operating system. Valve will offer SteamOS to individuals and vendors for free. The company hopes this will serve as the backbone for its living room gaming strategy, where people play video games away from their desktop or laptop computers and also use the console to watch movie and television content. While Valve waits for more companies to support Linux gaming, SteamOS will support in-home streaming that can enable a Windows or Mac computer to stream games to a set-top box running the new operating system.

With the Steam Machines, Valve will go up directly against companies like Nintendo, Microsoft, and Sony, although it is taking a much different strategy. If the console manufacturers are an Apple-like walled garden, then Valve’s Steam Machines are an open — and potentially fragmented — market like Android.

Valve isn’t providing any images of its prototype Steam Machine at this time, but it claims it will provide more info soon. It will ship its own box this year but just to that aforementioned tiny test audience.

The company also assures traditional Steam users that the core PC version of Steam will continue to push forward as it always has.