Twitter is making embedded photo tweets much more compelling, much more visual, and much more in your face, everywhere on the web.

I could tell you about it, but instead of wasting 1,000 words, let’s just show you:

Good morning! Perspective – Sunday is a fine day to go for a walk with a friend. pic.twitter.com/P3uDfjYsEU

The difference is that the picture is now on top of the actual text of the tweet. Previously, the text was on top — and on Twitter.com, that’s still true.

“As you can see from @Cmdr_Hadfield’s Tweet embedded above, we’ve put the photo front and center, with a bigger and bold visual focus on the media,” Twitter’s platform product manager, Brian Ellin posted. “Both landscape and portrait photos now have more room to show their pixels when the Tweets are embedded online.”

What’s interesting about this is that Twitter has in the past wanted consistency to how tweets, Twitter users, and Twitter controls were displayed across different platforms, even using that most-onerous of C-words with another one, certification, to justify locking down access to Twitter’s data in the great Twitter API wars of mid 2012.

But now, embedded tweets will be displayed differently on websites all over the Internet than they will on Twitter.com or in Twitter’s mobile apps. The left is Twitter.com; the right is an embed anywhere on the Internet: 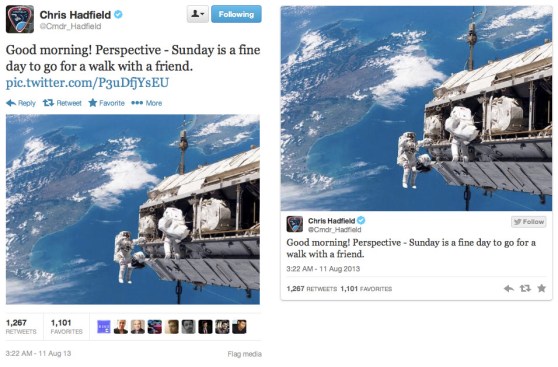 I think it’s the right call. It improves the look while just skimming through an article, is more accessible, and it looks gorgeous — especially with photographs from space.

And I’ve never been that big a fan of consistency myself.