Love may just be a few clicks away, Taco Bell has a “happier” hour, and you — yes you! — have one brand-new Apple iPad unclaimed at this very moment.

This week Google finalized a change that will clear spammy, ridiculous ads like those that pretend to be software updates or important notifications on your phone, and at least 20,000 apps will have to change their ways and stop abusing their users — or risk being kicked off Google Play. 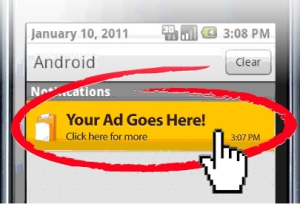 Above: Your ad goes here!

“The ad market has been a gray area, and some ad networks became very spammy,” Rob Weber, the cofounder of native ad network NativeX. “Up to this point Google didn’t take a stand, but now they’re really stepping it up.”

Google made two critical changes to its Google Play Developer Policies in late August, giving developers 30 days to update their apps, or else. The first is that ads within notifications are now banned, and the second is that adding an ad-focused new icon an Android user’s home screen is also banned.

For both of these, it wouldn’t necessarily be clear to users which app was causing the spammy alerts, or how they could easily remove them.

In the early days of Android, Google didn’t make a big fuss over these clearly annoying practices, perhaps partly because developers were having a difficult time monetizing on Android. Now, however, the Android user experience is catching up to Apple’s at the same time that Android monetization is making big strides — and Apple never allowed these kinds of ads.

In the process, however, Google will be sucking as much as $150 million of developer revenue out of the ecosystem.

“Tens of thousands of Google Play apps were using Airpush [one of the ad networks that promoted spammy ads like these],” Weber says. “They had over $150M in revenue, and we think 50-80 percent of their revenue was from this … and that’s just one of the networks.”

That’s revenue that developers who want to continue to monetize will have to replace, and NativeX is happy to oblige with native ads, as are other ad networks. But developers will have to hurry — this week is the first week of the new Google Play guidelines, and non-compliant apps risk being booted from the most important Android app store. After all, it wouldn’t be difficult for Google to track which apps have these types of ads and demand that they be removed — or else.

“This is an awesome move by Google, and will clean up all this mobile spam,” Weber says. “