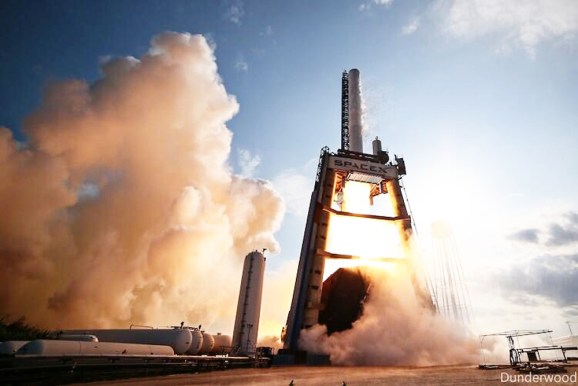 Canada, we are cleared for liftoff.

SpaceX Falcon 9 rocket will launch the Cassiope satellite for the Canadian Space Agency this Sunday. Canada is launching Cassiope in an effort to unravel “the mysteries of space weather.”

The satellite is 4 feet by 6 feet and will monitor the activity of solar particles using cameras that examine auroras, spectrometers, electron imagers, radio receivers, a “flux gate magnetometer”, and other cool space stuff.  This information could help protect the Earth’s infrastructure from damaging solar storms.

Cassiope — which stands for Cascade Smallsat and Ionospheric Polar Explorer– will also carry a “technology demonstrator Cascade payload,” which will move high volume data anywhere in the world.

Cassiope is the first of three satellites that Canada is sending into orbit as part of the RADARSAT Constellation Mission, which is intended to provide maritime surveillance, disaster management, and ecosystem monitoring capabilities through an enhance polar outflow probe (ePOP).

This is the largest space launch in Canada’s history.

Together, the three satellites will offer complete daily coverage of Canada’s 3,855,100 square miles of territory, and Canada will be able to monitor polar ice conditions, oil pills, ship movements, forest fires, wetlands and coastal changes, and other things.

The three-satellite configuration is a “paradigm shift” from earlier RADARSAT missions that launched a single satellite. By distributing the capabilities of the system across multiple satellites, the CSA aims to establish a “more robust, flexible system” that can be maintained at a lower cost, and launched using smaller, less expensive launch vehicles, like the Falcon 9.

SpaceX was founded by startup superhero Elon Musk (the “real-world Tony Stark of our age“), who also founded PayPal and Tesla Motors and serves on the board of SolarCity. In 2012, SpaceX launched the Falcon 9 rocket carrying a Dragon capsule full of supplies, which became the first private unmanned spaceship in history to successfully attach to the International Space Station.

The long-term goal is send humans into space, but SpaceX is starting out by sending other things, like cargo and satellites.

Governments are historically the only entities with enough resources to fuel space missions, but Musk has changed all that. SpaceX works with governments and private organizations to help them fulfill their galactic needs.

Earlier this year, it earned a contract with Thales Alenia Space to launch Turkmenistan’s first satellite into orbit to set up a national system of satellite communications.

This will be the first launch of the latest version of the Falcon 9, with upgraded engines and stretched fuel tanks.

Falcon 9 and Cassiope were initially supposed to launch about two weeks ago, but the event was postponed. The second attempt will take place at 12 p.m. Eastern Sunday from Vandenberg Air Force Base, in California.