If you compare the most popular multiplayer online battle arena (MOBA) games, the last thing players will tell you about them are their stories. After all, spending time wondering why the pint-sized Teemo, armed with little more than a blowgun, is fighting against a fearsome inter-dimensional foe like Cho’Gath won’t help you win your battles.

Heroes of Newerth developer S2 Games thinks it can keep players engaged from both a gameplay and storytelling standpoint with Strife (releasing in 2014 on PC, with a beta test planned for the fall). A few months ago, the company gave us a quick summary of Strife’s plot during a hands-on preview event. But recently, in an exclusive interview with GamesBeat, lore creator and hero concept artist Chad LaForce further explained the type of narrative he’s building with Strife and how the studio plans to keep it fresh and relevant for players.

The first step was to take the story seriously.

“The main way that we’re making sure that [players] really latch on to it was first taking it seriously ourselves: personally latching on to it as creatives and as a company,” said LaForce. “And then following through creatively through all the right steps. … And we feel that because we’ve done that and done it so deliberately, it will really resonate with the players — perhaps more than some other MOBAs out there that maybe didn’t think about story from the outset.” 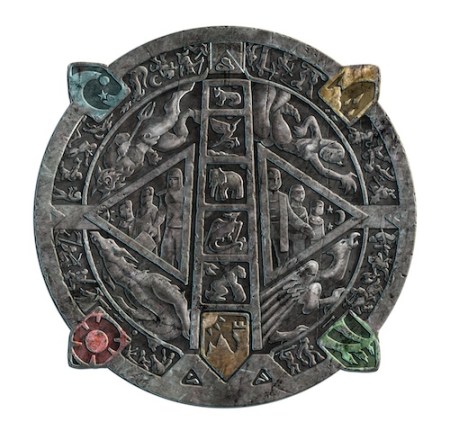 Above: The Great Seal of Strife honors the Keepers of the Code (middle), with seasons and ancient wars surrounding them.

Giving it room to grow

Like in most MOBAs, Strife has two teams trying to destroy each other’s towers and bases. These battles are known as the Trials of Strife, and these serve as training exercises for the heroes. Each of these playable characters come from five different planes: Gale (high-fantasy), Tempra (fire and ice), Vorbis (cybernetic), Nestra (astrological), and Lyrie (plants and animals). A prophecy says that a sealed sixth plane, the underworld Sheol, will one day reopen and let the Dharkwave, a race of demonic beings, invade. The characters fight each other to prepare themselves for that fateful day.

Not everyone believes in the prophecy, however. Some doubt if it’ll ever come true and fear that they’re just being manipulated. And while none of the characters are inherently evil, a few of them have their own selfish agendas for participating in the Trials — they might seek fame, power, or information (if they’re acting as a spy for someone else).

The only folks who know the truth are the Keepers of the Code, six people tasked with enforcing an ancient set of instructions — including the prophecy — given to them thousands of years ago by the Oracles (god-like beings). The heroes have to rely on the Keepers for guidance.

“A lot of power players — besides from just the battles that go on in the arena — give us a lot of material to unravel a really complex, really compelling story in the months and years to come,” said LaForce. “So we don’t want to just set out our lore and say, ‘Here’s the conflict. Here’s the world we’ve made. You can like it or you can leave.’ Instead, we’ve created a lore premise that will go through iteration. New revelations will be received. And twists and turns in the plot will happen.”

Some of those twists begin in the comic books. The developers are partnering with Teenage Mutant Ninja Turtle co-creator Kevin Eastman, who made cover art and page layouts while LaForce wrote the script. The comic is a prequel: It starts with the Keepers finishing the construction of the arena and seeing the first set of warriors arrive from the planes. At least “one or two more” books are in the works beyond the first issue. S2 Games doesn’t have any firm plans yet for turning it into a recurring series. 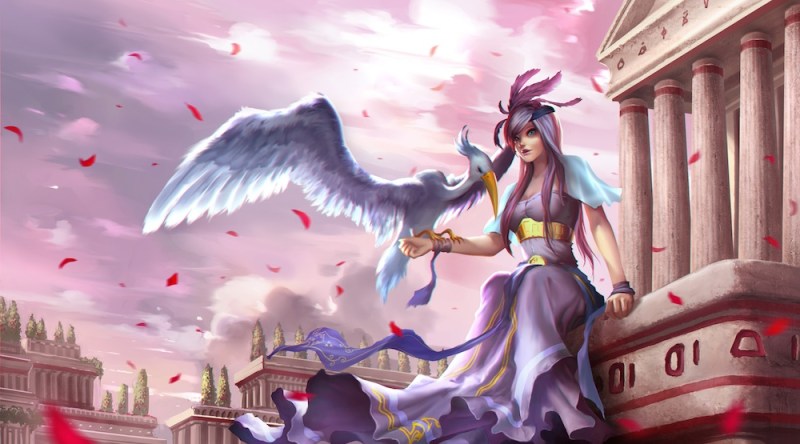 Above: The Keeper Auros is a skilled magician and acts as ambassador for the planes. Her sentinel pet is Cryllios, a blue crane.

Building plot elements into the arena

Although you’ll hear about most of Strife’s story through the comic books, its website, cutscenes, and short passages within the game itself, the developers are also conveying small but important chunks of lore when you’re busy fighting in the Trials. For instance, statues depicting the Keepers of the Code surround the arena’s Hero Wells, places where your characters return to after they die. Each of the Keepers have a sentinel pet — another gift from the Oracles — and they also have statues of themselves at various places on the map. 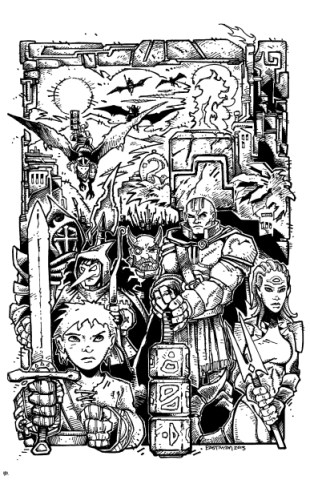 Above: A Strife comic book cover drawn by Kevin Eastman.

One of these sentinel pets can affect the tide of battle. The giant white ape known as Krytos is an autonomous character that can deal tremendous damage to your enemies, but only if you’re the first team to free him from his chains and defeat his captors. Krytos’s owner was Fobus, a Keeper who passed away — a death that supposedly proves the prophecy is coming true.

“I wanted to build story into that game mechanic, so we turned our lane pusher into Krytos,” LaForce said. “And he’s kind of like the avenging spirit of this Keeper who has departed. And he plays a heavy part, actually, in the first comic book that we’re working on with Kevin Eastman. So it’s going to kind of tie together in a cool way. … If [players] read the comic books or if they explored our lore at all, they’re gonna understand that Krytos is this big, emotional focal point of the game lore.”

As the story develops, the team wants to make sure that the game evolves with it. They’re still figuring out how and to what degree things might change, but one way they might do it is by making “subtle variations” to characters and heroes to reflect certain events unfolding in the story.

“Because we spent so much time deliberately creating this lore, we have a very strategic plan — partly in place, partly that we’re still developing — of how we’re going to deliver this lore in the most compelling way so that people aren’t over-burdened with it or exhausted with it,” LaForce said. “We don’t want people to search through endless forum threads to figure these things out.”