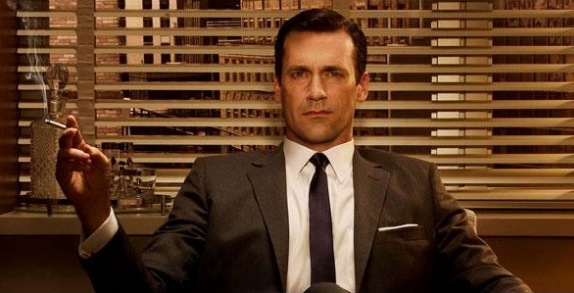 The mad world of Mad Men revolves around Don Draper, the visionary Madison Avenue executive who dazzles clients through a relentless devotion to consumer psychology and brand perception. A brand is not just a company’s identity, but the impetus that triggers emotion at the point of purchase. And it works.

But even with all of the amazing technology at our fingertips today, there’s been a setback. The flow of brand dollars has been slow to move as posters, print, and paint have been replaced by bits, banners, and blogs. Don’s weapon of choice, the 30-second spot, has yet to find its footing in this new age of advertising. Both brands and the technology industry need Don more than ever as they redistribute $200 billion of TV money from broadcast to web browsers, phones, tablets, and connected TVs.

We look to history as our guide as we assess the potential of this tectonic shift:

Granted Google and Facebook are more than just ad companies after building two of the world’s most iconic web properties, but if they and DoubleClick could construct billion dollar businesses out of static images and text, then Internet video can bridge consumers and brands in a way Don never dreamed of. Digital media advertising is expected to account for ¼ of the estimated $480 billion global advertising market this year, but channels everywhere are still void of the critical ingredient… emotion.

The majority of purchases in life are driven by emotion. Houses. Cars. Education. Clothes. Detergent. The dollars are spent not just for utility, but to satiate to our emotional needs. Have you ever been moved by a banner ad (and I don’t mean wanting to punch the guy who made “Punch the monkey”)? Unlikely. The most memorable ads are videos. (For example, Wendy’s Where’s the beef?, Nike’s Be Like Mike, and Monster’s When I grow up I want to be middle manager just to name a few.) It is the raw, visceral emotion of motion that resonates so deeply with our souls. It’s video that moves us, and we buy.

But as with all new media, simply porting over the old model without capitalizing on its new capabilities leaves opportunity on the table. As we’ve moved from the boob tube to YouTube, so has our tolerance for sitting idly through a commercial break. John Wanamaker famously opined that “half the money I spend on advertising is wasted; the trouble is I don’t know which half.” This is the first time in history that we actually know who is watching what, and there’s finally hope that his timeless maxim can be overturned.

So get excited! The brand ad is being reinvented, and with this shift comes a powerful cocktail of ingredients that will make the video ads of the future more effective than ever before. Here’s a breakdown of that shift:

Targeting — Connected devices serve each screen a different experience, ads included. When combined with established practices like cookies and data exchanges like eXelate*, a visitor to Autotrader.com can immediately start seeing BMW ads on other sites. YuMe* has data scientists on staff to create brand segments that let advertisers buy an American Idol-like audience across more than 1,000 web video properties. Flurry* can run mobile video ads for apps that complement those on your phone. Companies like DataLogix combine offline purchase patterns with online in a way that makes catalog marketers salivate.

Platform proliferation — Ratings have shifted from the big screen to all four screens: mobile, tablet, web, and connected TV. Roku*, recently recognized as the streaming video set-top box leader with more usage (Roku 37%) over any other streaming player including Apple TV (24%), streamed more than 1 billion hours3 last year. Tablets have exploded as consumption platforms: Apple has sold over 150 million iPad to date. These devices each contain a unique context, and some are sophisticated enough to reference data like your exact location.

Ad format — Attention is nuanced, and advertising is adapting to survive. YouTube’s skippable ads have become 75% of their revenue. On the opposite pole, when gamers want virtual goods without paying, watching a several-minute long trailer served up by Virool* is a welcome trade-off. Services like Tumbri optimize wording and images viewer by viewer. On tablets, interactive elements that allow viewers to raise their hand for follow-ups like a test drive are commanding CPMs that would make Don drop his martini. The formats must fit the situation.

Content — At first, there were 5 VHF channels broadcast from towers, then 100 over coaxial cables. Satellites beamed down 500. Roku just crossed 1,000 channels. Delivery platforms like 1Mainstream* and BrightCove take minutes to turn digital video assets into full channels. Soon, there will be hundreds of thousands of them, compounding consumption and aggregating niche audiences like never before (I’m personally awaiting the Thai Cooking Channel).

Reach — The Super Bowl has famously drawn more than 100 million eyeballs in recent years to defend its position atop the mountain of brand spots. The user bases of web properties like Yahoo! or the aggregate footprints across ad networks now dwarf the biggest program on the biggest screen.

This confluence of vectors sets the stage for an unprecedented migration of brand dollars online. While some investors remain tentative to jump in given the number of companies pursuing the market, it’s clear we’re in the early innings of the next gold rush in advertising. It’s not a question of if there will be winners, but who.

We’ll soon live in a world that looks closer to Minority Report than Mad Men. The scene where Tom Cruise walks into a store that knows exactly what he wants just by scanning his retina remains the Holy Grail of advertising, and that reality has come within striking distance thanks to technology. Advertising has always been an art while technology has been a science, but it’s exciting to see the mighty Don Draper join hands with the likes of Anthony Wood, Jayant Kadambi, and Ayyappan Sankaran to win the $200 billion at stake.