Earlier this year, San Diego, Calif.-based game studio Heavy Water tried crowdfunding to raise money for a set of consumer-oriented game world-building tools called the Axis Game Factory. But the Kickstarter campaign failed, raising only $25,209 of a goal of $400,000.

But undeterred, the persistent founders Matt and Tammy McDonald (pictured) are back with a new company, Axis Game Factory, and they managed to stretch their resources. They created their professional game creation tool, dubbed AGF PRO, on their own. While the original Kickstarter was aimed at ordinary gamers, this one is aimed at indie game developers and bigger game studios who could use better, more automated game creation tools.

“This is the era of the indie,” Tammy McDonald said. “We see AGF PRO as a huge asset to indies and large studios alike for development. ”

With this kind of tool, indies can get by with smaller teams, she said. Axis Game Factory has now launched version 1.0 of its AGF PRO 3D game-building tools for the PC and Mac OS in the Unity Asset Store. The tools are part of the company’s vision of making it possible for anyone to create games, and they are the precursor for a future consumer-focused version.

The pro tools are a lot like what the previous company Heavy Water originally promised. Designers can drag and drop assets, as if they were pulling parts from a warehouse to assemble a prototype. The tool library has a variety of themes, characters, cameras, game modes, and other assets. It also allows you to create your own custom objects for use in a game. The factory reduces the need to hire a bunch of artists and programmers to create things during a game project’s experimental stage. And Axis says it requires no progamming skill to use AGF PRO.

After the Kickstarter fell flat in February, Tammy McDonald said, “We had to change gears, refocus the product, and downsize the studio to make this happen. The product is great and I see it as a huge asset to indies and large studios alike for development.”

The tools can be used in stand-alone fashion on the Unity 3D game engine, working with both Unity’s free and pro versions. As originally envisioned, AGF PRO requires no programming skills for developers to use. You can use it to create game maps, sculpt terrain, and design levels quickly. It ships with over 400 assets.

It allows creators to see things real-time as they create them. Heavy Water will provide scene and game-play editing tools, art asset libraries, custom models, and more. The company says it will enable players to create sophisticated 3D games such as first-person shooters, third-person adventures games, or 2D side-scrollers.

From prototyping to creating complete games, AGF includes all of the necessary plug-ins, scripts, and shaders to allow all Unity4 users to import AGF scenes into Unity4.

“The reason we went for a “Pro” product as opposed to the commercial game product first is because we really had to build a deep system that has all of the working parts and features first,” said Tammy McDonald. “Then we will make a more simplistic interface for the commercial version as well as all of the asset packs and platforms that will be required for the consumer version. We had to take the limited funds and resources we had at hand to make the best product possible, which is AGF PRO.” 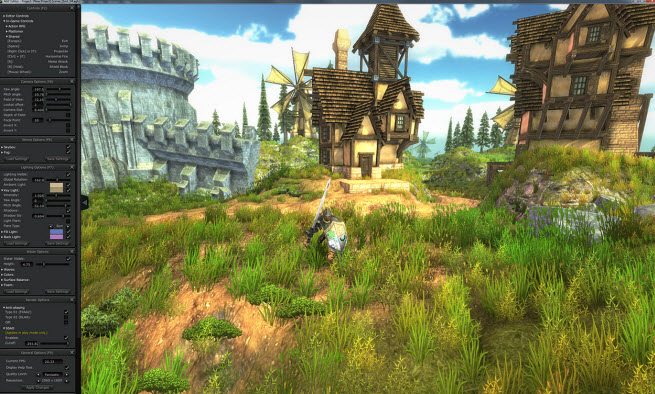