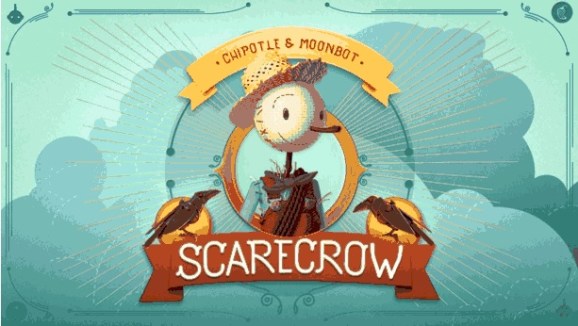 Chipotle Scarecrow will, without a doubt, go down as one of the most successful marketing campaigns in history.

Chipotle recently partnered with Moonbot Studios to produce an animated film and mobile game that cleverly promote its Food with Integrity campaign. The film reached 6.5 million views on YouTube in under two weeks, and the game rocketed to the top 15 free iOS applications on the US iOS app store. The message and success of the campaign was so impressive that it was written about in the New York Times, Time Magazine, and countless other publications, even further propelling its success.

When the dust settles, the short film will have millions of views and the game will remain installed on hundreds of thousands, perhaps millions, of iPhones — a banner ad reminding people about Chipotle every time they unlock their phone.

Viral films are nothing new in the marketing world; however this is the first time a brand has made a benchmark mobile game. It certainly won’t be the last, though.

Advergames, or advertisements in the form of video games, have existed for nearly as long as video games themselves. Some of you may recall the infamous Sneak King game sold at Burger King for $3.99 with a value meal.

The higher cost of building mobile games has for a long time discouraged brands from exploring the mobile market. However the success of Chipotle’s Scarecrow has shown advertisers that despite their increased cost, mobile advergames are a huge untapped opportunity.

Within four days of its release the game reached over 250,000 downloads, and despite a gradually declining ranking it will likely reach over a million US users within 6 months.

Lest that 1-million installs seems small when compared to the accompanying short film that will likely be watched by over 10 million people, consider that the average single player mobile game has a 90-day retention of 45% and average frequency of use of 3.5 times per week. It’s hard to imagine any other form of advertising that can claim to have engagement numbers that high. Unlike web based advergames, the Chipotle Scarecrow icon remains visible in both the App Store and on the mobile devices of all those who downloaded it, acting as a constant reminder of the Chipotle brand.

Chipotle Scarecrow’s success can be attributed to two major factors. Firstly, the game’s production value is exceptionally high. Characters and environments are beautifully modeled, the plot emotionally engages players, and a large amount of varied content drives repeat usage. Secondly, the game provides all of this free of charge. It’s refreshing to play a high quality game that never pressures or requires spending money, even if the game itself is an advertisement. As such, advergames have a distinct and powerful advantage against other mobile games.

As successful as the game has been, Chipotle Scarecrow could have been a far larger hit. The game was launched only on iOS, missing out on roughly 62% of the total smartphone market. Furthermore, the game requires a device at least as powerful as the iPhone 4S on iOS 6 and above — leaving out roughly 30% of potential iOS users. And finally, the game has been plagued by bugs that have driven its current App store rating to just 3.5 out of 5 stars.

It’s only a matter of time before other major brands catch on to the effectiveness of mobile games as advertising tools. Within a couple years we may see Coke or Proctor & Gamble compete in the App Store against traditional game companies like EA and King.com.

George Deglin is founder and CEO of Hiptic Games, a Y Combinator funded game studio. He is a veteran of the gaming space having led the development of five cross-platform mobile games. Three of his games have been released to date, and two of them have been featured by the Apple editorial team. Prior to entering the mobile gaming market, George worked as founder and CTO of Uversity, a Founders Fund backed company that has pioneered the way universities use social media to increase enrollment and student success through Facebook and mobile apps.