New York City may still lag behind Silicon Valley in tech, but this may not be the case for long.

A new report commissioned for the Bloomberg Technology Summit shows just how far New York City’s tech economy has come in the past few years, thanks in part to all the workers who have flocked to the city.

Here’s a sample of the numbers that are fueling the city’s tech growth:

The big question, though, is why New York City? Here’s the report’s relatively simple answer:

It’s becoming clear that as we shift to a data-driven economy, tech innovation depends not just on engineering talent but on expertise in areas such as design, commerce, content creation, and user interface. These needs play to the strength of New York, and other big cities as well, that have a critical mass both of large companies and creative workers. 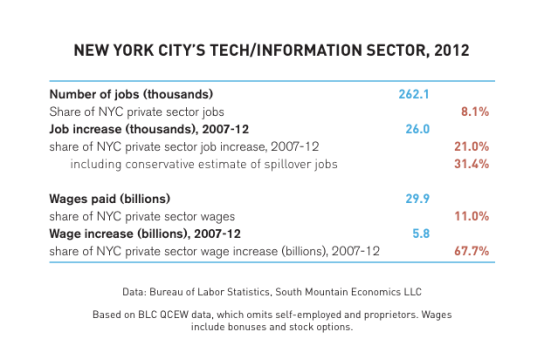 The other factor here is New York City itself, which has done an admirable job of fostering the right environment for its tech economy (led by Mayor Michael Bloomberg).

“While it’s still too early to say exactly what worked best  and what the long-term results will be, it’s clear that  New York’s efforts helped accelerate the growth of the tech/information sector,” the report concludes.