60 percent of Android smartphones returned to the store aren’t actually broken. And if InnoPath’s new Mobie app gets widespread adoption, they may not actually get returned in the first place.

“Android provides more than iPhone, if you know how to use it,” John Fazio, CEO of InnoPath, told me last week. “But the device has overrun the capability of the consumer.”

Mobie is an app that sits in the background, watching what’s happening on your phone. If it detects malware — which can be prevalent on Android — it acts to alert you and remove the threat. If it sees one particular app is constantly downloading data in the background, it tells you so you can stop it, and save money on your phone bill. Mobie also makes your device use its battery more efficiently, will allow you to trace your phone if it’s been lost, can lock it if it’s been stolen, and tell you what apps you might want to download. 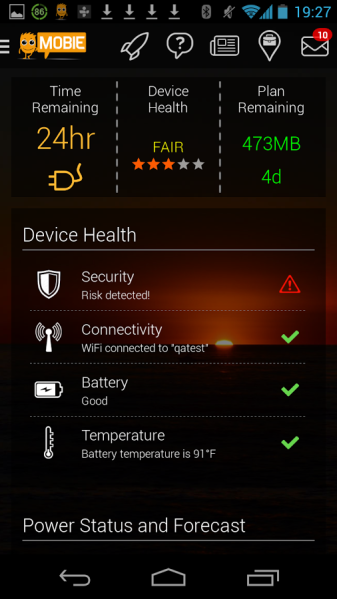 That’s not just because of what Mobie sees on your phone, but also what it’s learning from thousands of others.

“We protect the device, and we help people diagnose their hardware or software issues,” Fazio says.

Many times, the problems that consumers spend hours on the phone with carrier support about are not even real problems. For example, a common problem that InnoPath found in early testing was lack of charging. Because Mobie is watching, however, the company could tell that instead of being charged a couple of times a day, the device thought it was getting between 2,000 and 3,000 micro-charges each day.

Clearly, the “battery problem” was a charger problem.

“There’s the costs of returned devices for care centers,” Fazio says. “But also time for consumers who spend 90 minutes on the phone with the carrier.”

While the company’s product seems to offer big benefits for companies like AT&T, Verizon, and Sprint, the first focus is consumers. If InnoPath can get Mobie on enough phones, the app becomes a platform upon which the company can build monetization opportunities — such as app recommendations.

Parent company Innopath has been in existence for 13 years, building “hard-core technology for device manufacturers” such as Fugitsu and Qualcomm, as well as carriers like Verizon. Doing so, they’ve build cloud capabilities for device software updates that have handled hundreds of millions of transactions. Those transactions, in part, have illuminated the problems that Mobie is now trying to fix.

“Our goal is to show you apps on your device that are poor citizens,” Fazio says. “Then we give you a comparison with other devices in the ecosystem so you can compare, get additional information on which apps are being used, and which are problematic.”