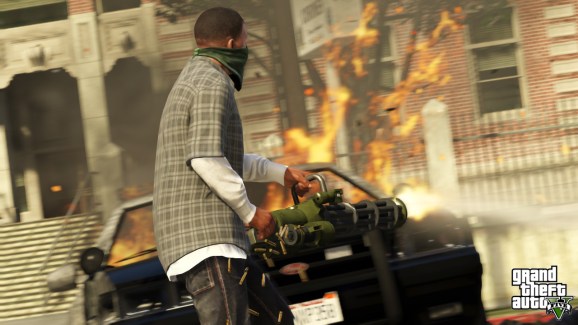 Franklin is doing nothing illegal at all in this Grand Theft Auto V screenshot.

A group of more than 200 academics, psychologists, and researchers are rallying for an objective look at media violence — including researching into violent games.

The cadre has sent a letter to the American Psychological Association (APA) urging it to use an objective, scientific process in an upcoming review of media violence research.

They’re concerned that a 2005 resolution on violence in video games and other interactive media, as well as the APA’s analysis and related policy positions on the subject, was marred by methodological flaws, ideological biases, and conclusions drawn from inconsistent or weak evidence.

“The issue of video game and other media violence continues to be contentious among both the general public and the scholarly community,” they write (read the full text of the letter). “Particularly in the wake of the Sandy Hook shooting, whether rightly or wrongly, much discussion has focused on this issue. Much is at stake regarding the way scientific information is communicated to the general public, the way in which policy statements can set scientific agendas, and the credibility of the field as a careful and objective science.

“Fundamentally, we are of the belief that the task force has a tremendous opportunity to change the culture of this research field to one which is less ideological and open to new theories, data and beliefs.”

The Entertainment Software Association (ESA) today welcomed the letter, noting that a growing body of research has found no link between media violence and violent crime. In fact, youth violence in the U.S. has dropped to 40-year lows during the video game industry’s lifespan, the scientists state in their letter.

“Although we do not assert video games are responsible for this decline — such would be an ecological fallacy — this decline in societal violence is in conflict with claims that violent video games and interactive media are important public health concerns. The statistical data are simply not bearing out this concern and should not be ignored,” they write.

In the 2005 resolution, the APA advocated for reducing all violence in video games and interactive media marketed to children. At the time, it believed these titles could increase aggression in children and young adults more than television and movies, and it urged game developers to address the issue and depict negative social consequences for violent actions. However, a 2010 study published in the Journal of Youth and Adolescence by Dr. Christopher Ferguson from Texas A&M International University found that depression, not violent video games, was a strong predictor of aggression and rule-breaking in young people. This and other research is why Ferguson and others in the scientific community believe the APA resolution can no longer be supported.

“The issue for a lot of us who signed the letter to the APA is the increasing concern that professional advocacy groups like the APA and others have misrepresented our field, often going for headline-grabbing scary messages rather than a careful and objective review of the science,” Ferguson told GamesBeat via email.

While Ferguson said it’s great the APA is reviewing its past policy statements, he believes the task force assigned to do it looks “stacked” toward a particular view. Out of the seven people assigned to the task force, four have expressed very public anti-media views in the past, he said. Two of them even signed the amicus brief supporting California in the landmark Brown vs. EMA case that went to the Supreme Court last year, which ultimately ruled that video games are a protected form of free speech.

“So it is not the ‘neutral’ review a lot of us were hoping for,” Ferguson said. “Thus we penned this letter in the hopes of influencing the APA to be much more cautious about making declarative statements than they have been in the past. They have an awful track record on misinforming the public on media-related issues. We hope that the APA will retire their old policy statements and replace them with nothing at all. Science should never be dictated by ‘truth by committee.'”

Ferguson believes it’ll be difficult to change the mindset of the APA, however, because its credibility is at stake. “Once they have made these kinds of declarative policy statements, they’ve put their own credibility on the line. To retire them means they’d have to admit to being wrong, which they have been. That’s a big issue I think … people in the general public often assume these policy statements by groups like the APA constitute a careful, objective review, but that’s never been the case in this area.  It’s too easy to stack the committee toward a particular political or moral view rather than a careful scientific review. These policy statements should be viewed as political statements, not scientific ones.”

In February, a Harris poll found 58 percent of Americans believe that video games contribute to violent behaviors in teenagers, while 33 percent admitted to letting their children play whatever game they want. Thirty-eight percent said they knew nothing about the Electronic Software Rating Board’s (ESRB) rating system.