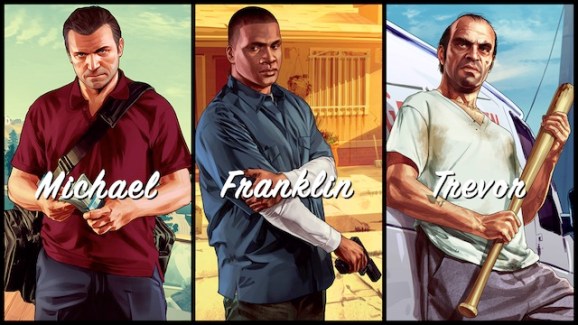 Grand Theft Auto V may be one of the best-reviewed games in all of history, but it does surprise us that it is also the highest-scoring GamesBeat Threeview to date. A 100 out of 100 … coming from Professor Murray?

Our academic reviewer wrote a beautiful piece below justifying that perfect score, but our own GamesBeat critic and industry analyst Michael Pachter (none of whom are pictured above) also chime in for our latest Threeview.

Warning: Very minor, very vague spoilers ahead. (We wouldn’t worry about it if we were you.)

Michael, Franklin, and Trevor embody the best and worst of what Los Santos and Blaine County have to offer. They’re not heroes, but despite my conflicted feelings, the engrossing narrative pulls you into their personal lives and the violent conquests they embark on. You’re both a witness and accomplice in their crimes. Depending on your personal tastes, that can come off as being repulsive, funny, or somewhere in between. You can also just ignore the story completely and spend hours looking for Bigfoot again in the mountains.

Exercising that freedom of choice is what helped launch Grand Theft Auto to popularity in the first place. Rockstar doesn’t always hit its ambitious goals, but it comes pretty damn close, and that’s enough to make Grand Theft Auto V its finest GTA game to date.

It’s a little late to “predict” how GTA V will do, given that Rockstar put out press releases saying that it sold $800 million the first day (a record for any game) and $1 billion in the first three days (ditto). Given the amazing reviews (a 97 average Metacritic score out of 100), it was to be expected that the game would sell exceedingly well.

If there is anything about the game that surprised me, it is the resounding lack of criticism. I assume that is because GTA V is the best game of all time. There were only two reviews below a 90, and one of those dinged GTA V for the moral fiber of its protagonists. That criticism is weak, indeed, and akin to an animal lover condemning The Elder Scrolls V: Skyrim because it didn’t do enough to protect the interests of the dragons.

In my view, you get what you pay for, and I think that there are few people who bought this fifth installment who didn’t know what they were getting into. Aside from critic reviews, there has been very little press coverage of the game as a stain on the country’s sensibility, unlike every other version of the game dating back to GTA III. That game was criticized for inciting the Washington, D.C. area sniper to action and was pulled from store shelves for a short time. This time around, a similarly deranged gunman in the same city killed several innocent people, but given that it happened the day before GTA V launched, the game was hardly mentioned. I am hopeful that in the future, violent video games will be viewed on their merits as good or bad games, as this one was, and will avoid being scapegoated for society’s failure to treat the mentally ill.

I am somewhat curious about how the GTA V online multiplayer will play out. It is almost certain that the Rockstar team will turn conventional multiplayer on its head, and although I don’t expect tens of millions of active online players, I think that at least half of the people who buy GTA V will give multiplayer a chance. Given that the game is on track to sell at least 25 million units, it is likely that more than 10 million will try multiplayer. If the experience is as special as single-player’s, Rockstar may reinvent yet another genre of gameplay.

Being an academic presents a particular kind of a quandary for talking about Grand Theft Auto V because there are all sorts of things that — being in that role — I am expected to indict. These things include but are not limited to the profitable imaging of misogyny, homophobia, generalized misanthropy, moral depravity, and a culture of violence. To this add the accusations of representing torture as effective in yielding good intelligence — even while this remains questionable, at best. The above listed are topical, urgent problems that are on everyone’s minds, and the designers of GTA V smartly needle those sensitivities around our collective complicity in them through their satirical model of the American way.

By now it has been well-reported that one of the key innovations of GTA V is the player’s ability to shift between characters on command. There is Franklin, the street hustler; Trevor, the berserker; and Michael, the disgruntled ex-heist specialist. There is something more beleaguered about these characters than in the past, in keeping with our incredibly fraught times. For me, this universal perspective interrupted my experience of immersion and ultimately felt gimmicky — like the overly elaborate system of controlling the physicality of CJ in GTA: San Andreas. Fitness, weight, street cred, sex appeal — it felt novel but excessive.

That said, by far the most interesting character in GTA V is the city of Los Santos. As an Angelino, I found the sense of place to be so sprawling and impressive, endlessly worthy of exploration, so full of palpable texture, so unlike LA and uncannily accurate at the same time, as to stir a sense of wonder. This treads into the territory of the sublime. How is that even possible in this jaded day and age? This has been the true strength of the last few versions of the game: sheer scale, detail, and spontaneous responsiveness. It has grown larger than our minds can calculate.

But that feeling which comes along with, for example, staring into the abyss of the Grand Canyon, is not without its sublime terror as well. Los Santos isn’t like being in the lived Los Angeles; rather it is more like being in an LA film. Michael Mann’s movies, particularly Heat (1995) and Collateral (2004) come to mind, with their aestheticized noire machismo and peril. The space of Los Santos is also a moral stage, filled with options, upon which players may engage with the most horrific realities that undergird modern life. Los Angeles embodies that mythical place to which “young men” go to seek their fortunes and remake themselves, leaving history and bad memories behind; it is also the place of broken dreams and corrupted ideals. Utopia and dystopia, truly the Wild West, the mythical LA stands as a beacon for criminality that we vicariously explore in the game.

Rockstar North’s Los Santos is a microworld of actual U.S. culture: an unflattering — but not entirely inaccurate — reflection of all the flaws this superpower possesses. To the critics of this game I would say: On the continuum of the nation’s social, cultural, and political shortcomings, GTA V ranks pretty far down on the list in terms of things we need to fix. GTA V, like its recent predecessors, is an auteur game, and as such it is “difficult” even while — similarly to an auteur film — it may technically fall under the category of entertainment. It is not the problem; rather, it points to a problem, and the two should not be confused.