Windows Phone is continuing to make inroads over the Atlantic, almost doubling its share of new phones sold in France, Germany, Italy, Spain, and the UK.

According to Kantar Worldpanel, Windows Phone has now hit 9.2 percent share in those key European countries, up from just 5.1 percent share last year.

Most interesting of all, perhaps, is Windows Phone’s performance in Germany, where Microsoft’s mobile platform hit 8.8 percent. That’s just one single percentage point below iPhone — a massive achievement. In addition, Windows Phone hit 10.8 percent share in France and 12 percent share in Great Britain, the first time it has ever hit double digits in either of those two countries.

“Windows Phone’s latest wave of growth is being driven by Nokia’s expansion into the low and mid range market with the Lumia 520 and 620 handsets,” said Dominic Sunnebo, a director at Kantar Worldpanel. “These models are hitting the sweet spot with 16- to 24-year-olds and 35- to 49-year-olds, two key groups that look for a balance of price and functionality in their smartphone.”

Android, of course, is by far in the lead, with 70.1 percent market share.

However, Google should not rest on its laurels.

“Android remains the top operating system across Europe … but its dominant position is increasingly threatened as growth trails behind both Windows and iOS,” Kantar Worldpanel said in a release. Kantar Worldpanel’s data typically reflects the latest three months of actual smartphone sales, which the research company gets by interviewing consumers.

Interestingly, Samsung’s share is starting to dip as well. Sony, Nokia, and LG are beginning to “broaden the competitive landscape,” Sunnebo said, as they mount a sustained comeback. 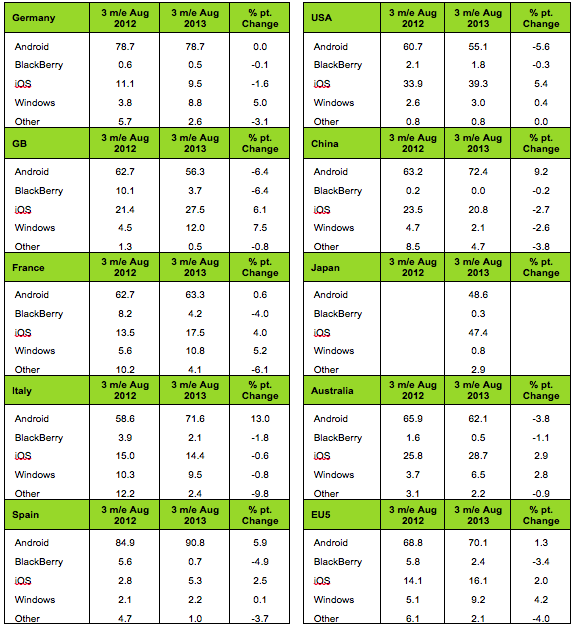