Sony is building an artistic platform out of its PlayStation Network. Games like Journey, The Unfinished Swan, and Papo & Yo from the past two years have all explored different methods of storytelling: without words, through color, and inside a child’s imagination.

Rain, out today on PSN from developer PlayStation C.A.M.P., is another shining addition to these ranks, telling a story of loneliness and hope through an equally experimental design.

A dark children’s tale
Rain’s opening cutscene is charming: a watercolor painting with splatters of blue paint for rain. It’s straight out of a children’s book. But the bedtime story turns surreal when a boy chases a girl and a strange creature through a door of light into a dark world where it never stops raining. There he finds that he and the other inhabitants are transparent in the rain, but underneath the cover of a roof or awning, they disappear. Navigating through the world means using this advantage to run and hide from silvery, skeletal creatures that howl in the night.

The storybook feel doesn’t end there: Rain communicates its narrative solely through written words that appear on the screen as the boy travels through the city, ever in search of the girl. At first, this is a little strange and seems overly descriptive, but the developers choose each word and phrase carefully, which gives heart to the actions onscreen without overwhelming the moment. 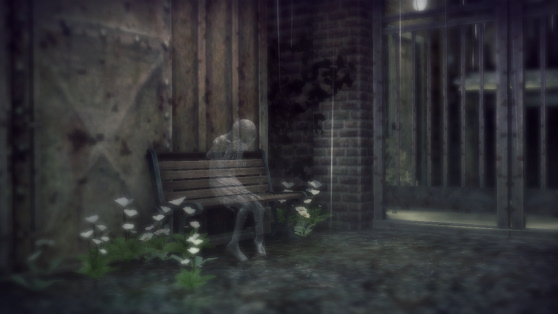 Above: The girl, crying alone.

The visuals are a dismal palette of blues, greens, and grays that make the characters’ silhouettes against the dreary but beautiful backgrounds (from alleyways to a churchyard) all the more haunting and the need to escape that much stronger. But no matter how bleak their situation seems, the boy and girl cling to hope with as much determination as they pursue the literal beacon of a house’s light in the distance.

A sense of discovery
Beyond the fundamental idea, Rain presents other ways for players to manipulate their presence in the world around them. Muddy water sticks to the characters even when they’re out of the rain, but they can wash it off by walking through a puddle or dunking into a stream or basin of water. Noise-making objects like phonographs can distract enemies, as can the rattling of a glass bottle or other debris under invisible feet.

One of my favorite moments is when Rain introduces how one kind of creature can interact with another to your benefit. Like many aspects of Rain, this is a happy discovery as well as a reminder of the underlying brutality and darkness. The tiny white critters fell ferocious beasts with startling ease.

It’s fair to say that Rain repeats some of its mechanics, especially when it comes to basic platforming, but I barely noticed this. It always felt like it was using them in a different way, even if it was only the circumstances that were changing.

A vibe all its own
Rain is, true enough, an action-adventure game with minimalist platforming elements and puzzles, and these are simple enough to solve without fuss. It’s more about the experience, and I liked the sense that I was always moving forward. Nevertheless, a hint feature (the Select button) is only a click away in case you get stuck.

What really surprised me, though, is how much Rain is like a survival-horror game. The helplessness of the frequent chase scenes, in which the boy and girl run from the Unknown — the great foe that stalks them and cheats death more than once — is only part of it. I also hid in lockers (one scene had me rethinking that video game trope) and watched my fair share of sudden death scenes: “The children were swallowed by the darkness,” the game-over screen told me before it let me quickly reload. I was thankful for the speed at which I could jump back in and retry from a close checkpoint but stunned at how morbid it all was. 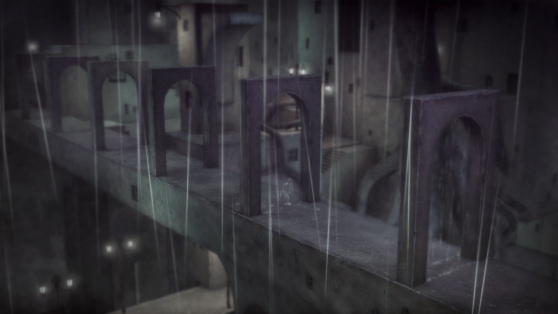 The world is scary enough by itself, and sometimes the rain pours down in a way that makes it look like either the static of an old movie or the graininess of a horror film. The environments are moody — from deep in the sewers to the halls of a destroyed house — and ghostly footsteps and the movement of disembodied, muddy feet are common sights. Later on, the world completely transforms, manifesting as an M. C. Escher painting come to life. It’s mesmerizing and, at times, creepy.

Rain sets a good pace, with tense scenes and more than one false ending. But without the innocence of the children to drive back the darkness, offering hope and the promise of happier days, I’d easily mistake this for a horror game.

A short length
Enjoyable though it is, Rain is only three hours long. The developers threw in an incentive to play again — a Memories collection that scatters extra written story pieces around town — but it’s not much. Replay value is low. 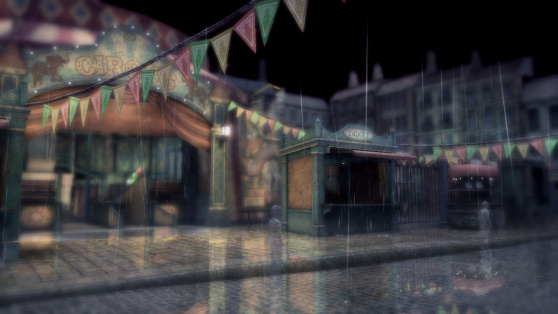 Above: The night circus in Sony’s Rain.

The ending (spoiler-free)
I loved how the story and gameplay managed to surprise or shock me, but I was beyond disappointed in the finale. Rain feels like it’s leading up to a unconventional conclusion — a bittersweet ending, at the least — but the developers ignored all the interesting story points in order to bring out the sunshine. Literally.

This ending resolves none of the dangling plot threads and mysteries. I was still wondering about the boy and the girl, in particular, and how they survived their ordeal. And in retrospect, the beginning doesn’t make much sense, either. I finished with more questions than I had answers.

Rain is a wonderful, atmospheric game that’s too short but well worth the experience. It takes turns that I never expected it to. I only wonder if another chapter or so could have given it the resolution it needed or if the developers simply built their story too complex to peel apart.

Rain was released for the PlayStation Network on Oct. 1, 2013. The publisher provided GamesBeat with a download copy of the game for the purpose of this review.