Mojang’s three founders, Minecraft creator Markus “Notch” Persson, Scrolls designer Jakob Porser, and CEO Carl Manneh, have a board meeting once a month. “We like to eat meat,” says Manneh. “So we go out and have a meal at a favorite meat restaurant in Stockholm, and we make very, very quick decisions. I’ve been involved in other companies where you have an external board and maybe venture capital who are part of the decision-making, but this is just us three. We can change the strategy of the company in one evening. That’s the strength of Mojang. We are independent.”

Minecraft is one of world’s best-selling games. Over 15 million people bought a copy for one of its multiple platforms — Mac, Windows, Linux, Xbox, Android, and iOS — in 2012. It finds use in education, architecture, city planning, and art. London’s Victoria and Albert Museum just hosted an event celebrating all things Minecraft. The United Nations uses it to involve young people in urban planning.

Mojang is three years old, and according to Swedish tech news site IT24, it made pretax profits of $89 million (580 million Swedish kroner) in 2012, with Persson personally receiving $98 million (640 million kroner) in Minecraft licensing fees. Yet Mojang’s founders didn’t set out to create a large company or become millionaires; they just like making games. Now they want to make Mojang the best workplace in the world. 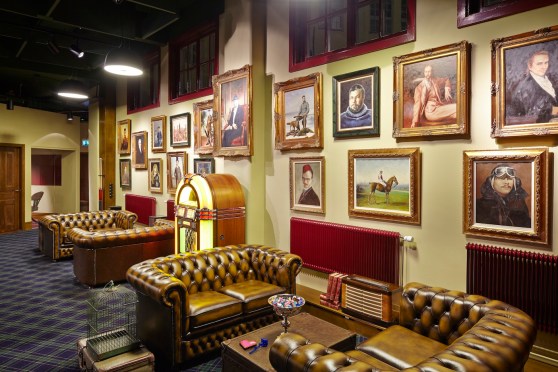 Above: Family portraits: Each staff member is depicted in an oil painting.

The understated, soft-spoken Manneh told me Mojang’s story. In 2010, Manneh was the CEO of photo album startup jAlbum. He hired Persson, who had already released the first version of Minecraft, as a web developer. When Minecraft started to take off, Persson decided to set up a games studio called Mojang (which means “gadget” in Swedish) with fellow game designer Porser. Persson asked Manneh if he knew anyone who could run the business side of Mojang. Manneh volunteered himself, hired a team, and found an office while still running jAlbum. By the time this new game company officially launched in January 2011, it consisted of seven people. Minecraft had already sold one million copies.

Since then, Minecraft sales have climbed to spectacular heights, turning it into a global phenomenon and Persson into a gaming rockstar. According to Manneh, hundreds of people make their living on Minecraft’s coattails, including an entire ecosystem of YouTube video makers and Minecraft server hosts. 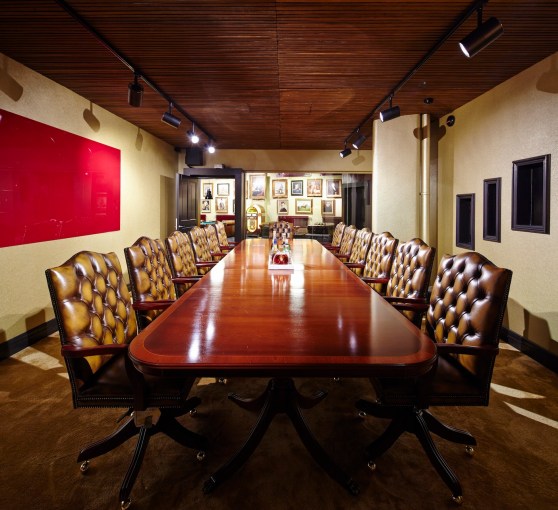 Above: 1970s Bond movies inspired the decor for the meeting room

Mojang’s extraordinary office is modeled after an English gentlemen’s club. “We wanted to make an environment which feels more like a home rather than an office. We saw in our previous office that people were there from 8 a.m. in the morning until 12 at night. It’s a very social environment,” Manneh explains.

The central area has a pool table and pinball machine. Pairs of Chesterfield sofas sit on a tartan carpet beneath hand-painted oil portraits of each and every staff member. “Our big meeting room is designed after James Bond movies in the 1970s, so it has golden carpets and golden wallpaper, and everything is oak and dark wood,” says Manneh. The CEO’s favorite room is the movie theater/games room, where Tuesday is Movie Night, for which Mojangsta JunkBoy even designs fliers. On Friday afternoons the whole company plays games.

Recently, a variety of indie Xbox Live games have been popular with the developers: Mount your Friends, One Finger Death Punch, and Hidden in Plain Sight. The staff also plays NHL 2014 and Counter-Strike: Global Offensive regularly. The games room houses a huge range of board and card games, including Cosmic Encounter, Magic: The Gathering, and Android: Netrunner.