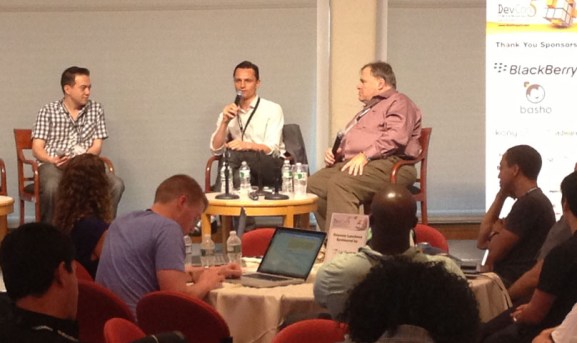 As depicted in the press, the impact of HTML5 seems to be a battle between whether to develop native or for the Web, with the reality being that these days, HTML5 and CSS3 (along with the suite of java script solutions that come with CSS3) are actually changing the span of control enjoyed by developers.

In particular, many large enterprises emphasize two things: the server and the capability to deliver performance on the backend. Java and C have been the sought skill set. Meanwhile, the backend side of the system – including hardware – has been IT decision makers’ dominating concern. This led to the scoping out by enterprise architects of a standard desktop or laptop strategy, which would assure a common user experience and, in doing so, become acceptable to IT. To this end, the impact of the iPhone cannot be overstated.

Steve Jobs started a revolution of endpoints that led to the “Bring Your Own Device” [BYOD] movement as well as the end of the enterprise architect’s control. And the revolution did not stop there. Once the endpoint was freed from conformance, the performance requirements dramatically changed and, as a result, instead of designing to meet an internal network and endpoint, IT found itself with barbarians at the gateway.

Like Clayton Christensen’s Innovators, the power wielded by BYOD phones and tablets sparked a lasting change in the rule-making of information delivery. As a result, when I am listening to companies’ requisitions for people, the shift has occurred from wanting Java and C to wanting HTML5 and JavaScript. In other words, the frontend has become the dominant part of the need in the enterprise, and its dominance is spreading. In fact, one chief information officer has suggested that his expectation is that all product managers are going to have to improve their skillset to impact developers’ requirements in the near future.

The rise of JavaScript also revealed pertinent pain points that the BYOD world has yet to overcome, including node.js and other no SQL solutions point to the redesign of the backend, JQuery Mobile and a host of others on the network I/O problem, and solutions like angular.js on the graphics.

The meta-message of these systems? Pent-up innovation is finding an outlet in javascript to directly impact the BYOD experience.

As Peter Parker’s Uncle Ben taught us all, with great power comes great responsibility. Of course, the new found dominance by web developers is not without peril. As IT departments rely more on the web developer with javascript for direct access to the servers, the problems of feature creep will be more directly assignable to the web developer. In fact, in my oh-so-humble opinion, web developers should guide the requirements into a discussion of responsive design.

Additionally, storytelling and game design can help guide the requirements in ways that can tremendously reduce feature-creep as well as show IT something they probably should have understood along time ago: web developers are the right people for the job of delivering the systems of the future.

Carl Ford is the EVP of content development at CrossfireMedia, the co-creators of DevCon5, the conference dedicated to HTML5 development and the Impact of the Mobile Internet on Applications and enterprise solutions. Their next event is Dec. 10-Dec. 11 in Universal City, Calif.