The app, which allows users to take videos, slice them up, combine them in novel ways, and even add chunks from other MixBit users, first launched on iOS in August of this year. That’s interesting, because the pair are funded, at least partially, by Google.

Each clip can be up to 16 seconds long — one second longer than competitor Instagram and almost three times as long as Vine’s six seconds — but a complete project can include up to 256 clips for an hour-long not-quite-feature film.

The real genius here is the crowdsourcing, crowdsharing, and social way of building “home” movies on MixBit’s website, which lets you take a piece of a Hawaii surf shot from someone in Oahu, a clip of African wildebeest from another person in South Africa, and a slice of the high school football game right here at home to build something unique and creative.

MixBit is entering a super-competitive market, of course, with Vine and Instagram and others. But after refining the app for months on iOS, MixBit is looking forward to entering the larger Android universe, a MixBit representative told me via email, and it’s eager to share the collaborative video creation experience with “hundreds of millions of Android users around the globe. 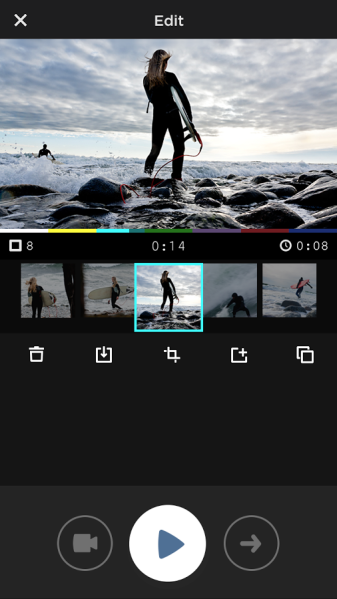 I’ve used the app on iOS, and it’s incredibly easy to shoot and edit video. Within seconds I was shooting video, and within minutes I was arranging and rearranging 16-second clips into a complete project.

MixBit is a project that Hurley and Chen have built under the auspices of their new company, AVOS, which is a digital media creation and discovery company that they established separately from both YouTube and Google, although with some funding from Google. As the two say on their site, “we swing for the fences.”

When we founded YouTube in 2005 we were looking for a way to share videos online with our friends. Now eight years later, people upload 100 hours of video to the site each minute. At AVOS we are building new tools to help people to create, find, and share great multimedia content.

The app is available from Google Play. At least one Samsung Galaxy S II user has downloaded it and says “it works fantastic.”