Pick your starter, catch new allies, fight eight gym leaders, save the world, defeat the Elite Four, and become a Pokémon master. This is the frame for every main entry in publisher Nintendo’s incredibly popular Pokémon series, starting with the original Red and Blue versions for the first Game Boy.

Now the monster-collecting/fighting franchise makes it way to Nintendo’s newest portable console, the 3DS. And while some things on the presentation side have noticeably changed, Oct. 12’s new X and Y versions don’t stray more than a Pokéinch away from that iconic formula, to their benefit as much as to their detriment.

Once more unto the Pokébreach
X and Y represent the sixth generation of Pokémon games, so a lot of what you do in X and Y will feel familiar to series veterans. You start out as a young kid with a single Pokémon and then start a journey across a vast land, collecting new monsters, increasing the strength of the ones you already have, and defeating any other trainer who stands in your way.

The addictive nature of Pokémon’s gameplay is what turned the franchise into a phenomenon in the first place, and it’s still as engaging as it was in 1998. You’re constantly finding new creatures you want to capture, working towards a new evolution, or obsessing over the finer details of making the perfect party. You always have something exciting to discover just a few minutes away, even if you’re not progressing the main quest or collecting badges. No other role-playing series does a better job appealing to obsessive collectors. 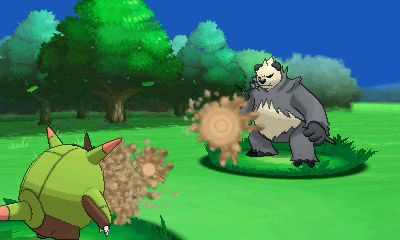 Above: A Pokémon battle in X and Y.

The jump to 3D
I’m not talking about the 3DS’ glasses-free 3D effect, but rather the game’s jump from 2D visuals to a fully 3D world. For the first time, Nintendo has rendered every town, character, and Pokémon with polygons instead of pixels. The result is the biggest graphical leap the series has ever seen. Battles no longer consist of two pictures of Pokémon awkwardly staring each other down with limited movement. Each critter now feels alive and emotive, triumphantly roaring as they make their entrances or wincing in pain when attacked.

The setting, the Kalos region, has a distinctive French influence. Cafés litter the world, everyone seems a bit more obsessed with fashion than usual, and you even have an Eiffel Tower knock-off standing in the center of the largest city. It’s a beautiful country to explore, especially with X and Y’s colorful, cartoon-like visuals.

Things that are new
For the first time since 2000’s Gold and Silver versions added Dark and Steel-types, Nintendo has created a new affinity for Pokémon. The Fairy-type is strong against Dragon, Fighting, and Dark Pokémon, which goes a long way toward helping the series’ balance. You’ll find plenty of new Fairy pocket monsters early in your quest, so you’ll get to add them to your party pretty quickly. Nintendo has also retconned a lot of older Pokémon to fit into the new category, like Clefairy, who was previously Normal-type.

Besides being useful, the new Fairy-type critters are cuuuute. I mean … you know, if you care about that sort of thing.

Above: Sylveon, a new Eevee evolution, is Fairy-type.

You also get access to a pair of roller blades pretty early on. While you can still get a bike, the skates are a great way to quickly get around the various routes and towns.

Other new features are a little less practical. For example, the Pokémon-Amie let’s you pet your party members in a way that’s similar to Nintendogs. You can also play some minigames in the new Super Training mode that can increase your pocket monster’s stats. These features are kind of fluff, but they’re fun distractions from the constant grind of battling.