No risks
I said before that this is the sixth main entry in the Pokémon series, and even with all those years and sequels, X and Y still follows the same framework set by the original. Now, I admit that it’s a good frame, but I really wish Nintendo would take a few more risks. The three starting Pokémon you can choose from in the beginning are either a Water, Fire, or Grass-type … again. You have to fight eight gym leaders and the Elite Four to prove you’re a true master … again. You have to stop the evil Team (insert second word here) from doing something generically evil … again.

It’s all incredibly familiar to anyone who’s stuck with the series since the beginning, and sometimes you do feel like you’re just kind of going through the motions. Thankfully, Pokémon’s mechanics and base gameplay are so strong and timeless that the whole thing still manages to entertain, but I wish X and Y could have surprised me a bit more. 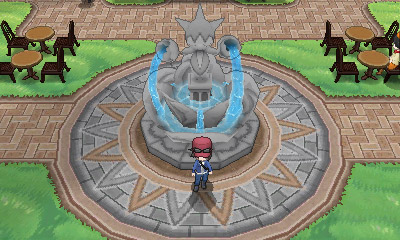 Above: Chilling out in front of a fountain.

Even the last entries, the Black and White versions, seemed like they were making some interesting progress by offering a plot that actually asked some hard questions about the Pokémon universe (is it really ok to capture wild animals and make them fight each other?). Unfortunately, X and Y’s story reverts to the fluff we usually get from the franchise.

The 3D implementation
OK, now I am talking about the glasses-free 3D, which is very underwhelming. In fact, most of the time, notably when you’re walking around most of the game’s towns, the 3D isn’t even available. It also causes a noticeable hit to the frame rate during battles when it is switched on. I know a lot of people aren’t really fans of 3D, but I usually enjoy the effect. Still, this was one of the few times I mostly just kept the feature off.

Mega Evolutions
Nintendo’s marketing efforts for X and Y have really focused on the Mega Evolutions, which is a new stage of evolution available for a small amount of Pokémon. While the Mega Pokémon do look neat and are certainly powerful, the feature doesn’t really live up to the hype.

Above: One of Mewtwo’s Mega Evolutions from the upcoming Pokémon X and Y .

For one thing, the implementation is a little weird. A Pokémon can only temporarily access its Mega Evolution during battles, even though doing so costs nothing. So you can turn your Blastoise into a Mega Blastoise at the start of a fight, cause some mayhem, and then revert back to a normal Blastoise at the end. Since there’s no real disadvantage to Mega Evolving, the only reason you wouldn’t want to do it is if you’re tired of watching the short Digimon-style animation that shows the flashy transformation. Why not just make it a permanent change?

The ability to access Mega Evolutions also causes something of a divide in the Pokémon populous. A pocket monster that doesn’t have a mega form suddenly feels a little less special. Of course, you’ll have a hard time filling up your party with Pokémon that actually can Mega Evolve, since the games only tell you about a handful of critters who can use the feature. You also need to find and equip specific stones for the whole thing work.

The Mega Evolutions themselves look great and offer some noticeable power, but I just wish they were a bit more practical.

Pokémon X and Y might mark a big visual jump for the series, but the structure remains steadfast in its dedication to tradition. These are still fun games that offer the potential for hundreds of hours of entertainment, and some of the new additions, like the Fairy-type, are certainly welcome. But X and Y don’t really stand out from their predecessors, and I really am starting to wonder how much longer Nintendo can repackage what is essentially the same game.

Still, Nintendo will get away with it at least one more time. X and Y may not surprise you, but Pokéfans will still revel in another chance to catch them all.

Pokémon X and Y come out for the Nintendo 3DS on Oct. 12. The publisher provided GamesBeat with copies of each for the purpose of this review.