Warning: This piece has some story spoilers.

Polite society has nothing to like about Grand Theft Auto V, the urban crime video game that generated $1 billion worth of sales in just three days. The title smashed all records, but it’s an embarrassment to the respectable video game establishment that wants a Disney-like image. Even as Grand Theft Auto V pushes gaming into a high state of awareness in the mass market, the game industry leaders would rather forget about it. This game allows players to engage in disgustingly bad behavior that will make parents everywhere cringe, but the game appears to be more popular than ever. 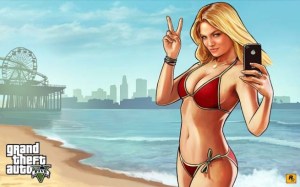 It raises the uncomfortable question: Is this game incredibly popular because it is so irredeemably indecent? If you figure that the larger mass market enjoys cute games without extreme violence, then Grand Theft Auto’s audience should be getting smaller. In this age when we can play with Pokémon on a 3DS or Angry Birds on an iPad, GTA V seems like a throwback to the days when a “gamer” was a maladjusted and angry young male who had no friends. This title is more violent and repulsive in its portrayals of women than past titles. I used to have this rule where I only played “good guys” in a video game. But there’s just no way to stand by that rule and play this game. There are no “good guys” among the three main characters, Franklin, Michael, and Trevor. The nicest among them is Franklin, a young peacemaker up-and-coming criminal who is also a cold-hearted assassin. He kills for a $5,000 payment. By the end of the game, I had turned these assassinations into an art form.

This is kind of inconvenient and embarrassing as the video game industry seeks its place at the table among other kinds of entertainment and art. The industry welcomes the pop in sales that it will see as cash registers keep on ringing through the holidays. This is the high tide of the game business and the current generation of consoles. But the Entertainment Software Association, the lobbying group that represents the big game companies, felt the need to point out that some video games — all of them less popular than GTA — teach you a sense of right and wrong by giving players more ethical choices to make in games. Gamers are more diverse than ever, to the point that the term “gamer” means as much as a “movier” or “TV watcher.” But everybody feels the need to play this game that really ought to appeal to only a hardcore audience that tolerates torture scenes. If we are a peace-loving people, why do we like this game so much?

I’ve finished the 69 missions in the game. Rockstar delivers an outstanding experience that reflects the polish and ambition of a $260 million project in the works for five years. GTA V deserves the average 97 out of 100 rating on the review aggregator site Metacritic. I played it for more than 40 hours because I didn’t want to miss out on one of the cultural events of our times. Everybody is playing GTA V, so I had to join in on the fun and try to finish it before other people did. I wanted to know the ending before somebody spoiled it for me. The reason this game is popular is because it has been hand-crafted by artisans who have the time and money to create something that reflects their finest workmanship. I agree that the folks at Rockstar games, led by Sam and Dan Houser, are geniuses who have become very adept at flipping their middle fingers at the world. 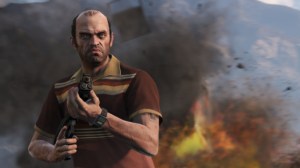 The freedom to be bad

But I feel like I’ve been manipulated by evil geniuses. Grand Theft Auto V lets you do everything bad that you can possibly do, and often it gives you no choice about it. Two minutes into the game, two black characters banter with racially and sexually charged chatter, tossing the N word out once every 30 seconds. You cannot modify their talk so they are more polite. When you first meet the third of the main characters, he is humping a female meth addict from behind, and then he kills her angry boyfriend by stomping him to death. You don’t get to choose whether to stomp or not. In the game’s most controversial scene, you have to torture a man in order to complete a mission. You have no power to prevent these things from happening if you want to finish the game’s long story arc.

When you do have choice, it isn’t pretty. Your character can get high on marijuana and even campaign to make it legal. You can receive oral sex from a prostitute in a car, and you get the choice of viewing it from different angles. Your character can get lap dances in a strip club and you get to decide whether to risk touching them and incurring the bouncer’s ire. You can change the station in your car’s radio, listening to hate-speech-filled songs or pop music. You pretty much have to kill people, but you do get a choice of many different kinds of weapons to use.

In one random scene, I went to assist a young woman who said she needed help with a crazy guy. I followed her, and she led me into an ambush where three armed men killed my character. After that, I didn’t bother helping the poor innocent bystanders. The game trained me to think that there was no score in being good. Those bastards at Rockstar — they’re messing with my head. I am a kind person, but they’re turning me into someone who doesn’t care about taboos. Aren’t they?