Today, after no comments from Apple, I also tested my iPhone 5C and discovered similar issues: 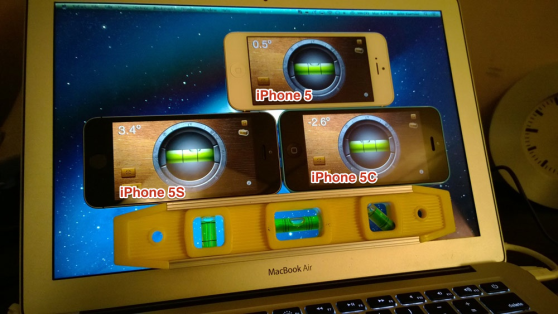 As you can see, the bubble level is reporting that my laptop is, actually, level (I had to add some old business cards under the left back of my MacBook Air to achieve that position). But the iPhone 5S reports an angle of 3.4 degrees, and the iPhone 5C reports an opposite lean of -2.6 degrees. The iPhone 5, on top, reports the closest to the true level — and perhaps the absolute true level, since, as you can see if you look very closely, the bubble in the spirit level is shading just a hair to the right.

(In case you’re wondering, I also tested each phone individually, and by moving them from left to right to center on the level, and saw similar readings. So the readings are not being manipulated by stacking the phones.)

The upshot, of course, is that the sensors in the iPhone 5S and the iPhone 5C are simply not accurate. At least, not in my models, and certainly not in the models of others on Apple support forums, or in Gizmodo’s testing.

I’ve been in touch with an Apple representative on these issues, and received responses, but Apple has not released a statement on the issue, or given any guidance on what might be happening here — whether it’s a software issue, a calibration issue, or the worst-case scenario: damaged sensor hardware.

The internet is starting to notice, with some sites saying that the iPhone 4 has antenna-gate, iPhone 5 had scuff-gate, and iPhone 5S may now be having sensor-gate.

That’s the last thing that Apple needs for its new flagship iPhone models, which both have so much going for them. Both are currently selling well, and with the iPhone 5S’s new camera, fingerprint sensor, and 64-bit processor, and the iPhone 5C’s sleek plastic body and relatively inexpensive sticker tag, Apple should have a pair of winners on its hands.

Unfixable sensor problems, however, would put a dent in Apple’s reputation as the company that sweats the small stuff to get every last detail right.