Samsung isn’t the only company unashamed to follow in Apple’s footsteps.

HTC is aiming to include a fingerprint scanner in its upcoming 6-inch One Max Android phone, just like Apple’s iPhone 5S, reports Sim Only Radar. A Verizon employee has also leaked out potential images of the One Max with Verizon branding (above) and notes that it has a fingerprint sensor, according to the Android Central forums.

One Max’s fingerprint sensor is apparently on its rear right below its camera (so it will likely sense your index finger), judging by images that recently hit China’s Weibo social network.

HTC hasn’t yet confirmed the existence of the One Max, but a slew of similar leaks have given us a decent sense of what’s to come. The device is HTC’s attempt at a phablet like Samsung’s Galaxy Note, using the solid hardware design from this year’s HTC One. 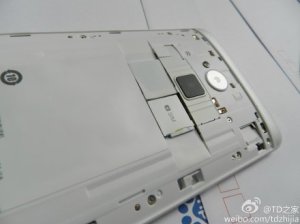 Above: A close-up look at the One Max’s fingerprint sensor

HTC will likely use the fingerprint sensor for unlocking the phone and dealing with secure transactions, like App Store purchases. HTC isn’t the first Android manufacturer to take a swing at a fingerprint sensor (Motorola also included one in its failed Atrix phone), but it’s the first to do so after Apple’s iPhone 5S launch.

Apple’s “Touch ID” fingerprint sensor has garnered plenty of praise, but it also has the benefit of being embedded deep within iOS, allowing it to handle very secure transactions. Apple also points out that its sensor is more sensitive than most other fingerprint sensors.

HTC, a company that’s sorely in need of a hit, needs to focus on features that differentiate it from the competition, not try to catch up with gimmicky features that it likely won’t be able to implement well. (The same goes for most other Android phone makers.)