It’s not every day that you see an EA Sports producer suck at his own game. Yet that’s exactly what was happening with Thomas Singleton: The Miami Dolphins were thrashing his New Orleans Saints, forcing turnover after turnover. Singleton repeatedly assured me it was all intentional … and that he just wanted to get back on defense for the purpose of our demo.

Sure, Thomas, whatever you say.

He was showing me CoachGlass, a virtual defensive coordinator on tablets and phones (iOS, Android, and Windows) for the Xbox One version of Madden NFL 25. As its name suggests, CoachGlass is only accessible through Microsoft’s free SmartGlass app. Once players log into SmartGlass with their gamertag, the app will sync with Madden over Wi-Fi and transport the defense play-calling mechanic from your TV to your mobile device.

One of the first things that struck me about CoachGlass was how robust it was. It’s far from a simple stats sheet: CoachGlass feeds you the plays it thinks you should pick based on data from the game you’re in and from online matches within the Madden community. Think of it as a live, crowdsourced alternative to the Ask Madden feature (a static list of plays curated by the developer).

“When we thought about building a companion app that was utilizing SmartGlass, we didn’t want something that was passive,” said Singleton. “What we wanted to build was something that was engaging, interactive, meaningful, and made sense to the sport of football.” 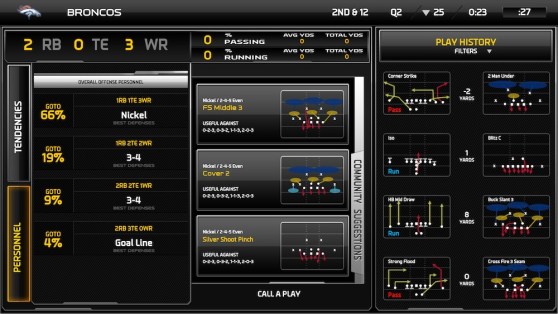 Above: This is what CoachGlass looks like on a tablet.

It teaches you how to become an astute play-caller

Two tabs, Personnel and Tendencies, present an overview of what your opponent likes to do on offense. The former tells you what type of formation they have in regards to their skill positions — in the screen above, the Denver Broncos have two running backs, no tight ends, and three wide receivers. Based on this information, CoachGlass immediately suggests three different schemes that Madden players have used to stop that personnel before. If you go one level deeper, you can look at the players in those positions and see how often the quarterback has thrown or given the ball to them.

Tendencies help you get a sense of a team’s passing and running habits, right down to which part of the field they like to target (left, middle, or right), what kind of pass they throw to those areas, and how many times they were successful. For my demo, Singleton noticed that New Orleans passed 66 percent of the time and threw a lot of short passes to the left side of the field. He picked the short left box in Coach Glass, and that brought up two defenses that had the best chance of stopping that play.

The last feature is Play History, which stores the last 64 plays ran by both teams during a game. You can flip through them all or view just a few pairings with the Current Down filter — for situations like seeing how many times the offense passed versus how many times it ran on 1st and 10 — or the Personnel filter, which narrows it down to plays the offense previously used with its current formation on the field. Singleton said Play History is especially useful in online matches because people tend to have a favorite play or two that they like to exploit. 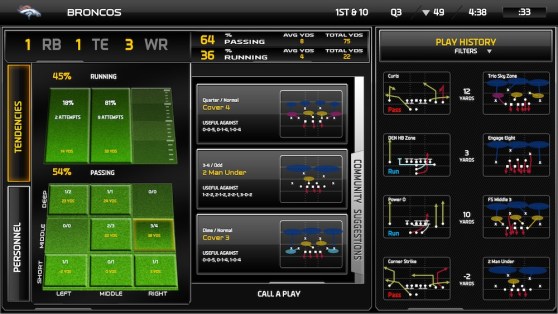 Above: You can see what areas of the field the offense likes to target the most.

It can help you on offense, too

Despite CoachGlass’s focus on the defensive side of the ball, you can also use the information to help you when you’re on offense. As the quarterback, the suggested plays now become warning signs, and if the defense on the field resembles what you see in the app, you might want to call an audible and change the play.

“Offense is very rewarding and there is a lot to do on offense [already],” Singleton said when I asked him why CoachGlass doesn’t offer the same features for offense. “Defense is a little more challenging — we’re making efforts in that aspect and getting better at it. And we’ll continue to do that each year. [CoachGlass] really helps defense a lot. There’s a lot more to do.”

Diehard Madden players probably have crunched these numbers in their heads for years, but CoachGlass presents statistics in a way that’s easy to read and absorb without taking too much time away from playing the game. CoachGlass will debut alongside the Xbox One version of Madden NFL 25 when Microsoft’s new console launches on Nov. 22.