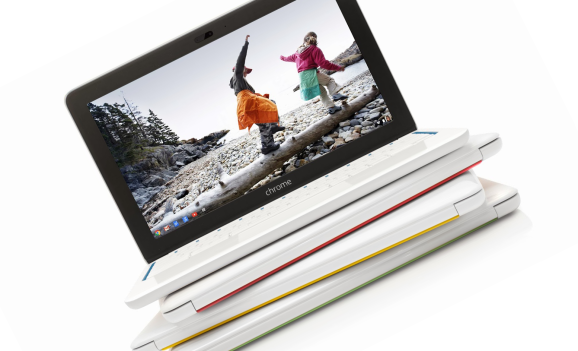 Google is calling its new Chromebook 11 the “Chromebook for everyone,” and it may just be right.

The device, unveiled at an event in New York City today, addresses just about all the concerns we’ve had about Chromebooks since the beginning. It’s lightweight, well-designed, and perhaps most importantly, cheap.

First, the exterior. Seemingly taking cues from the MacBooks of old, the 2.3-pound Chromebook 11 is both sleek and distinctive. It’s a major departure from HP’s previous Chromebook, the Pavilion 14, which was big, clunky, and almost completely antithetical to what Google is trying to do with the Chromebook line. (Though you could probably say the same thing about the Chromebook Pixel, which is still just as baffling as the day it was announced.)

At $280, the Chromebook 11 also follows in the tradition of the $250 Chromebook Samsung announced at roughly the same time last year. That device was half the price of the Chromebooks that came before it and showed that Samsung had unlocked at least one part of the ChromeBook puzzle: These things really have to be cheap.

HP has also furnished its new device with a display that has a 176-degree viewing angle, which means you can see the whole screen clearly even if you’re not sitting directly in front of it.

As far as battery life goes, HP is claiming six hours, which is a major improvement over the 3.5 hour capacity of, say, Acer’s Chromebook.

Also notable: The Chromebook 11 is micro USB-powered, meaning  you can charge it with the same plug you use to charge your smartphone and Kindle. And that’s pretty neat.

The Chromebook 11 goes on sale today and is available via Google Play, Best Buy, Amazon, and through HP itself.