The Apple iPad Mini came out on top with a response time of 75 milliseconds, or more than twice as responsive as the Google Nexus 7 and the Samsung Galaxy Tab 3 8.0, said Rohan Relan, the cofounder and CEO of Agawi, an interview with VentureBeat. The fourth-generation iPad came out at 81 milliseconds. 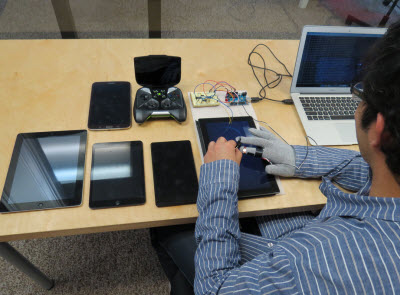 “The iPad significantly outperforms all the other devices, but Amazon did well even though its device is $90 cheaper than the Nexus 7 and $160 cheaper than the Galaxy Tab 3,” Relan said. “This is important because tablets are more often used in gaming and interactive music applications.”

Nvidia’s Android-based game device, the Shield, came in at No. 3 at 92 milliseconds, while the Microsoft Surface Windows RT came in at 95.

Agawi previously made headlines with its debut report on touchscreen speeds when it found that Apple’s iPhone 5 touchscreen was 2.5 times faster than Android devices. In that sense, the iPad’s superiority isn’t a surprise, Relan said.

Relan said his team is still investigating the reasons why the results come out the way they do. He said that Amazon may be willing to sell its hardware at a loss, and so it may have included better touchsreen components in its device.

Apple may also have increased the polling frequency for touches, which could cause a tradeoff of speed versus battery life.

The TouchMarks benchmark measures the touchscreen latency, which is as important to users as display quality. Most competitive discussions focus on pixels per inch and quality of image. The TouchMarks II benchmark measured the minimum app response time [MART] scores. The benchmark tests the lightest possible apps, measuring how immediately they respond on a given device. Agawi’s AppGlimpse division plans to regularly measure the speed of various devices.