Before Hillary Clinton walks into a meeting with another world leader, an aide hands her a briefing book that contains key information about that person.

That dossier is one of the ways top government officials seem so much smarter than ordinary schlubs like you, me, and Sarah Palin. We’re at a disadvantage because we don’t have assistants giving us the lowdown on everyone we meet and the questions interviewers might ask us. But with the wealth of data available on social networks, anyone could — in principle — assemble their own dossiers before a meeting with almost any individual.

That’s the idea behind Refresh, a mobile app for iOS that promises to create an “instant dossier” on anyone you meet. The company behind it, also called Refresh, just secured a $10 million Series A round (.pdf press release) of investment. Although the app is in beta testing, you can download it from the Apple App Store today, if you’re in the U.S.

The company’s cofounder and chief executive, Bhavin Shah, got the inspiration for the company way back in 2004 when he was working with Secretary of Health and Human Services Tommy Thompson on an international mission to Kabul, Afghanistan. He saw the power and utility of the briefing books Thompson got, which enabled him to make eloquent speeches and form real connections with people.

“It was just incredible to see how quickly people could get up to speed and then take that information and connect with one another,” Shah told VentureBeat today. “It was that experience that resonated so deeply with me.

“That’s when it hit me that most of the business productivity that we see happens because people can connect.”

At the time, building a company based on that inspiration was impractical; in 2004, there were only a handful of social networks, led by Friendster and MySpace, and they weren’t used by many people. Shah went on to start a gaming company and then eventually — years later — founded Refresh to duplicate the “dossier” experience for ordinary people. 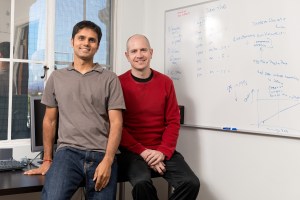 Refresh doesn’t actually store data on the people it profiles. Instead, when you look someone up using the app, it pulls data from a bunch of sources simultaneously: LinkedIn, Facebook, Twitter, Foursquare, Github, AngelList, Yahoo, and even Zillow (for housing data). A connection to Crunchbase is in the works, and the list grows by a source a week, or even faster, Shah said. In each case, it uses your identity when making queries, so you only get to see data that is either public or which you are permitted to see according the social networks’ privacy settings.

Is it creepy to use Refresh to look up data on people before you meet them? A little — but most people have enough social intelligence not to abuse the power. For instance, when I was interviewing him, Shah mentioned that I grew up in the same part of Ohio as his technical cofounder. I immediately wondered what other data on me that Shah could see: Was he looking at pictures of my family? Did he know what model of car I drive? The price I paid for my house?

“Even if we’re telling you stuff about someone’s car or stuff like that, you’re not necessarily going to use it in conversation,” Shah told me.

“This information is all upside. … A lot of it is just mental candy.”

Chief technical officer Paul Tyma is the engineering lead for the company. Tyma used to work at Google, founded two previous startups, and also — on the side — runs Mailinator, a service providing disposable email addresses. Tyma also contributed to a book on Java programming in 1996.

Founded in 2011, Refresh is based in Palo Alto, Calif.