Trigger Happy is announcing today that it has licensed characters from puzzle-platform game Portal 2 so that fans can use them in their own animated cartoons built with Trigger Happy’s storytelling app, Toon Hero. 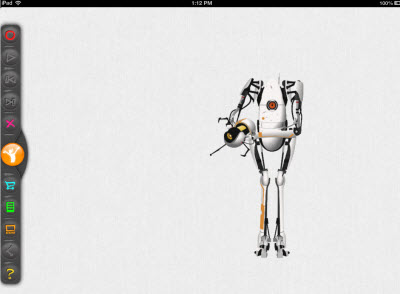 For the first time, fans can create their own animated stories on an iPad app using characters such as P-Body, pictured, from the Portal 2 multiplayer mod.

Auckland, New Zealand-based Trigger Happy, the creator of the Toon Hero, has cut a licensing deal with video game publisher Valve. Trigger Happy launched Toon Hero about six weeks ago, and now it is ramping up the publicity with the Portal 2 characters.

The interactive iPad app lets users create their own animated stories using famous characters. They don’t need any special animation training or artistic ability. They just use their imagination to create their own stories with characters provided by Trigger Happy.

“This is the first time a popular animated character from a video game has been put in the hands of fans,” says Shona Grundy, the chief executive of Trigger Happy. “Our company continues to push the limits of animation by giving people of all ages the ability to take their favorite animated characters, from any animated environment, and tell the stories they want to tell.”

P-Body will be available in the Toon Hero digital toy store for 99 cents. Other characters already available include those from The Jim Henson Company, Hero: 108, Mukpuddy, and National Geographic. The characters can be used to share thoughts, jokes, and more. The user simply taps, drags, or speaks. They can create their own animations from world-famous characters.

“The Portal community is always creating and expanding the fictional world of Aperture,” said Arsenio Navarro from Valve. “Toon Hero invites all test subjects to experiment with Portal 2 characters and environments via a leading mobile storytelling app.”

The new character is being released in time for the New York Comic-Con convention. Trigger Happy is targeting the app at a wide range of ages, and it is in talks with a wide variety of content providers to get more licensed assets.

Toon Hero is a free download available on the iPad in 14 different languages. Trigger Happy was founded in 2010, and it has 18 employees. Investors include the New Zealand government and private investors. Rivals include Toontastic Jr. Trigger Happy was formed by Grundy and her brother, chief product officer Karl Butler, in a bid to make use of their expertise in animation.