When the publisher of one of the world’s largest independent political blog networks calls your company a scam, you tend to pay attention.

Yesterday, in a post on Talking Points Memo, publisher John Marshall condemned services like Google Currents and Flipboard, which he called “scams against the publishers.”

Predictably, Flipboard CEO Mike McCue doesn’t agree with Marshall’s assessment. Flipboard, he argues, is as much of a boon for publishers as it is for their readers. In an interview with VentureBeat, McCue underscored the potential value of Flipboard, which he says is all about exposing publications’ content to new audiences and giving media companies a new revenue stream.

But McCue also admits that he doesn’t have all the answers — nor, at this point, does anyone else. 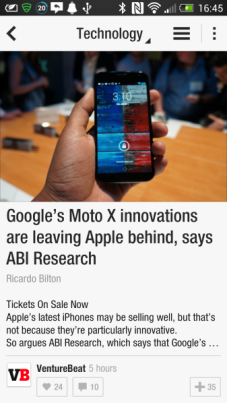 “Developing ways to support and subsidize great content is a work in progress,” he said, acknowledging that there are a lot of publishers out there still trying to figure out what sticks.

While Marshall’s comments point to a latent distaste with services like Flipboard, they’re nothing new. Last June, both Wired and the New Yorker scaled back their Flipboard partnerships, suspending their ad sales efforts and ditching their full Flipboard feeds for less expansive ones.

“If digital consumers want to interact with Wired, they can do so at Wired.com and not through an intermediary,” Wired publisher Howard Mittman told AdAge after the news.

Mittman’s comments, as well as Marshall’s, underscore one of the more common criticisms of not only Flipboard and Google Currents but technology like RSS feeds as well: Publishers really aren’t crazy about any service that comes between them and their readership.

This is a reality that Marshall alluded to in comment on a GigaOm last night. “Your visits to intermediaries that scoop up all the value and relationship for themselves doesn’t add anything for us as publishers,” he wrote.

“You can’t eat brand awareness or pay salaries with it.”

In other words, in Marshall’s view, if you’re reading this story on Flipboard, you’re not helping VentureBeat all that much.

That distaste seems to be a fundamental one that transcends any discussion over revenue sharing and audience expansion. Publishers just want that relationship with their readers.

Flipboard’s CEO understands that, of course. “This is a part of a larger journey that the whole industry is on. How does great content thrive in a digital environment? It’s a puzzle, but we’re well along to figuring it out,” he said.

But for the more impatient publishers out there — including Talking Points Memo, Wired, and the New Yorker — the answer is to figure things out on their own — without Flipboard’s help.