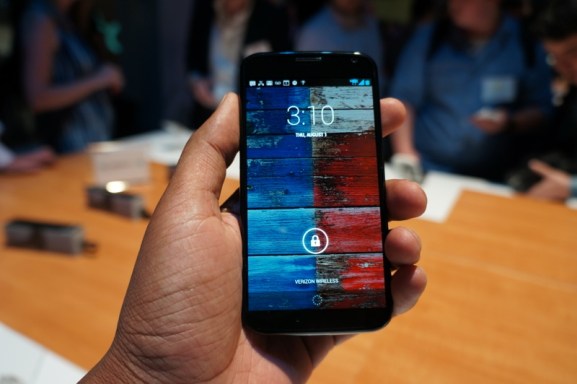 Apple’s latest iPhones may be selling well, but that’s not because they’re particularly innovative.

So argues ABI Research. The analyst says that Google’s Moto X is a more innovative device than Apple’s new iPhones, which it maintains “show only minor improvements over last year’s iPhone 5.”

ABI Research is a big fan of the Moto X features, including the device’s always-on voice commands, ergonomic design and its display, which ABI says is greatly “underrated.”

In contrast, the company dismisses the iPhone 5C , arguing that it “simply sports a new housing material in a variety of colors.”

ABI even takes the time to dump on the iPhone 5S’s fingerprint scanner, which could both change how people secure their phones and usher in the future of mobile payments.

ABI Research, however, isn’t impressed. “Finger print [sic] ID was first introduced in handsets by Motorola a few years back on the ATRIX HD 4G,” it points out.

But here’s the real zinger:

The combination of solid engineering, creative features, and timely introduction of those features was Apple’s trademark but it has faded in this category over the last two years. Q3 2013 marks the start of another potential company that has put together that rare combination of traits that bring user-friendly, innovative, practical products to market.

Now, if you’re a constant follower of online “debates” about the future of Apple, the above might feel strangely familiar. We’ve heard it all before. In fact, if you believe some of the criticisms, Apple hasn’t innovated in years. (Hell, even the iPad was dismissed as just “a giant iPhone” when it was announced. Today, it’s a $10 billion business.)

Still, in spite of the company’s supposed lack of innovation, it’s Apple, not Google, that sold 9 million phones in one weekend.  This, I think, can only mean one thing: In matters of market performance, innovation might just be a tad overrated.