But in releasing the new Mobile Backend Starter for iOS, Google has staked a claim to a platform beneath Android and beneath iOS, and one that is potentially more sustainable and lucrative over the long term than either of them.

Mobile Backend Starter for iOS provides data, notifications, status, and authentication services for iPhone and iPad apps, using the exact same infrastructure built on Google App Engine that Google made available for Android developers in April of this year. Getting started is literally as simple as filling out a web form to deploy a backend for your app, and then setting up an app in Apple’s Xcode development tool with appropriate Google connections and authentications. 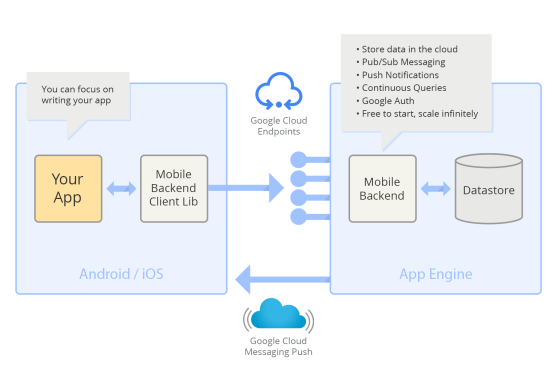 Free in terms of cost at least until you get to significant scale, and free in terms of time and energy because all the heavy lifting has been done for you. Developers who wish to go farther and deeper, of course, have that flexibility, using Google’s open source code, posted on Github, as a template to learn from.

That’s incredibly tempting for developers and will allow you to focus on your user interface, your app, and leave the cloud and backend services to Google.

It’s also a toolset that enables cross-platform development with the same backend and the same cloud-based compute and storage capabilities accessible to both your iOS and Android apps. That would make it attractive to do more and more of the heavy lifting for your app — standard data storage, processing, and so on — in the cloud, and not in the app, which makes smart, social, and real-time connected apps lighter and quicker to develop, debug, and maintain.

Backend Starter also promotes a Google-owned, developer-centric platform of data, compute performance, storage, messaging, and user authentication beneath both iOS and Android — or any other mobile platform, eventually, if Google chooses. So it provides a set of tools that could lock in developers to the Google cloud-based ecosystem.

That’s clearly a threat to what companies like Zend are doing with cloud-connected apps built on a PHP backend, but more importantly, it’s a threat to developers’ ties to the iOS ecosystem, where Apple’s tools for developers have tended to focus primarily on the app development side in Xcode and less on the cloud-centered needs of developers. Apple has built some of those tools, to an extent, with Core Data and iCloud, which developers can use and which enable Apple to transfer essentially everything on users’ old iPhones to new devices.

But both have been somewhat buggy and slow (although Apple made major improvements in 2013), don’t have the flexibility and compute capacity that Google can offer, and, most importantly, are not cross-platform.