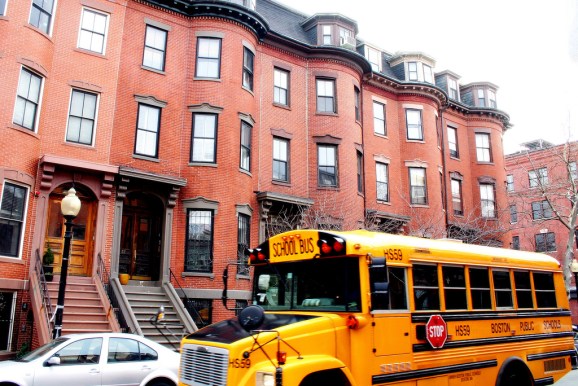 Uber is shepherding Boston school children to school for free.

School bus drivers in Boston initiated a surprise work stoppage yesterday, stranding thousands of the city’s 57,000 students at home or at bus stops.

Uber swooped in with its sleek black cars (and regular cars and SUVs and taxis) to try and save the day. The on-demand car service offered free rides for families and students to and from any Boston public school, no promo codes required or questions asked.

Most of the buses are now back in operation, and Uber was a little late to roll out its offer, but it was a smart marketing move, if nothing else. And if anything else goes wrong, Uber is at the ready.

The New York Times reported that the Boston strike (the first in more than two decades) was set off in a “roundabout way” by the shutdown of the federal government. Apparently, the bus drivers union lodged multiple complaints with the National Labor Relations Board, which is not currently operating, and they decided to walk off the job without notifying the city, school officials, students, or parents.

Only 30 of the district’s 650 routes were staffed, and absenteeism tripled in the district.

Certainly, one could blame the bus drivers, for getting the kids mixed up in their shenanigans, or the federal government, for being incapable of running the country. However, let’s look on the bright side and at a company that is leveraging its significant resources to do some good.

Uber has had a tough time establishing itself in Boston. The company’s business model poses a threat to traditional cab companies, and regulatory bodies around the country have challenged its existence. Uber has been embroiled in multiple political battles and court fights for years in Boston, although it recently defeated local officials in court. Still, use of traditional cabs still dwarf Uber rides in Boston.

This initiative could create some goodwill with the community, not to mention attract some new users, and it will be interesting to see if ridesharing competitors Lyft and Sidecar attempt to do something similar as well.

Other organizations in Boston are also chipping in. Students were allowed to ride public transit for free and police helped take kids to school.

Uber recently raised a whopping $285 million round of funding and is valued at $3.5 billion. The company is known for being a fierce competitor that isn’t afraid to give free rides when it can help the business.

When Austin city officials tried to keep Uber out during SXSW this year, Uber offered free UberX rides, and when Lyft entered St. Paul and Indianapolis in September, Uber responded by offering free rides in those cities until the end of September.

Sure, these free rides end up being expensive for Uber, but the company is on a mission to get into as many cities and attract as many customers as possible. It has also been known to offer on-demand ice cream trucks and mariachi bands.

I was tough on Uber when it announced a new summer SUV service to the Hamptons, which cost a hefty $500, and a $3,000 helicopter options. But along with the extravagance and emphasis on luxury, Uber is also quick in a crisis.

Sorry, kids, looks like you have to do your math homework after all.