You just bought that shiny new iPhone 5S for $700 or so, but before you could get that $40 case on, you drop it right on the hard pavement, and its almost-unbreakable Gorilla glass shatters like your quickly-dying dreams of technological bliss.

That’s sort of what the technology behind a new Apple patent is aiming to prevent. 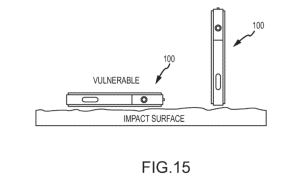 Patent application number 20130257582, otherwise known as “Protecting an electronic device,” includes a drop sensor processor much like Apple has included in its laptops for years, and a “motor in communication with the processor and a mass operably connected to the motor.”

With that processor and that mass, Apple could create radial force — much like a motorized sander or drill in your hand — that would flip the phone to always land on its most rugged edge, protecting both the glass and the internal phone components.

The harder problem might be that the drop sensor has no way of knowing how far away the ground is, and therefore how many rotations it can safely allow the device to undergo before safe impact. There’s likely no time to activate the camera and then both take and understand an image. In that case, the drop sensor would have to maintain a wobbly sort of stability in falling, much like how a Segway stays up without falling by being in constant imbalanced balance, to keep the phone more or less on its side as it falls.

I can see the ad now: My smartphone has jets. 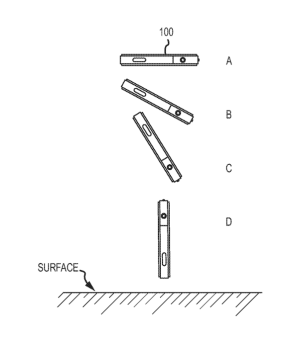 Fitting something like that into an already-tightly-packed iPhone which Apple is trying to make as tiny and light as possible sounds challenging in the extreme. So do other methodologies Apple lists as possible ways to cushion the phone’s fall: using an internal gas canister as a thrust source to adjust the device’s orientation, re-purposing a cooling fan to blow air to create and “air cushion” just before impact, or, yes, even using an electric ion propulsion system to slow the phone down.

That is seriously science fiction, and likely more fiction than science.

In other situations, the patent says, Apple could build in technology to grip an attached power cord to prevent a fall, and retract any exposed buttons or switches to prevent damage to them.

It’s hard to know how much to take seriously when reading a patent from a technology company, as companies tend to include everything including the kitchen sink so that their patents are as broad as possible and any technology invented in following years can ideally be traced to that patent, and therefore protected. Some of the capabilities in this patent application look like they make a lot of sense — if they can be fitted into a tiny enclosure — but some, such as jets and ion propulsion in a device that fits in your pocket, seem fantastical at best.

Here is the entire patent: