Editor’s note: Spoiler alert — this story talks about the ending, but it does not spoil the surprise of the ending.

Beyond: Two Souls is out today — it’s an exclusive game from Quantic Dreams for Sony’s PlayStation 3 video game console. I’ve played it, and Beyond’s one of the very best of the year. 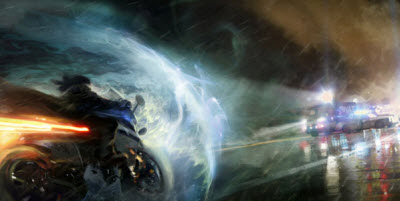 But it’s not because it has great moment-to-moment gameplay — and is in fact in spite of its clunky control mechanisms. Beyond tells a great story, and it has a great ending. Whatever you do, whether you really enjoy the gameplay or not, you must finish this game once you pick it up. This is narrative gaming at its best. You’re playing a game, but it will feel like you’re participating in a movie. And you really ought to see it through.

I think it has the kind of ending that gamers will be talking about. The game is a short, 10-hour jaunt, but in that time, you feel like you really get to know Jodie Holmes, the main character, and her constant spiritual companion, Aiden, who is a spirit tethered to her from birth. This is also the kind of game — like this year’s BioShock Infinite and The Last of Us — where you will find it hard to escape discussions among people who will spoil the ending for you. You’re going to have to hide out like a hermit to avoid having someone tell you the ending before you encounter it.

Gaming etiquette will require that you ask someone if they have finished the game before you start talking about it. I have seen people make this kind of mistake of not asking that question many times, and it’s no fun for the person who has the game spoiled. We’ll have to learn to talk in code, without spoiling it for someone who is unaware.

To me, the ending was special because I wasn’t expecting it. It was an emotional roller coaster that rolled on and on. It contained enough of a surprise that it raised a strong emotional reaction for me. But I don’t want to suggest there is just one ending. After all, it’s a game that is fully based on making the right choices in life. You’ll be able to choose different endings. But even as you do so, you’re still going to be surprised at what transpires.

Beyond is worthy of its heritage, as it was made by David Cage and his Quantic Dream game studio. Quantic Dream’s previous game was Heavy Rain. It also has a complicated narrative, but it’s one that isn’t as tightly woven as the story of Jodie, who is superbly portrayed by Ellen Paige. Heavy Rain also had multiple endings, but I suspect many gamers will be motivated to replay Beyond to experience another aspect of the ending. That way, you’ll fully explore your choices, and which decisions really matter.

So far, this year has been a great one for good endings to games. I think that means the industry is growing up. If I had a complaint about the game, it’s that it was much too short. So yes, this one has me demanding more.

Was the ending satisfying? I think so. It was clear. It wasn’t as puzzling to me as some of the other big hits of the year. I don’t want to seek out others who played the game so they can explain it to me. I simply want someone to talk about it with.

You’ve been warned. Now go out and finish the game. And once you do, please discuss it in the comments below, without fully giving away the ending.