A new Twitter experiment called “Event Parrot” will send you breaking news from around the world, via direct message.

“This is a Twitter experiment. Follow me to receive direct messages that help you keep up with what’s happening in the world.”

13,500 users have trusted that so far, and that number is growing fast. 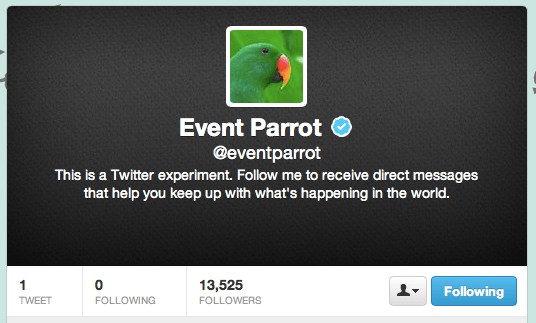 If it is an actual Twitter experiment, it’s an ingenious one that further brings Twitter into its sweet spot of “what’s happening now” and allows Twitter users to keep up to date with current world events without actually having to follow CNN, the BBC, and other major news organizations. And, as such, it’s a interesting attempt at news curation.

I asked Twitter if Event Parrot is an official Twitter-sponsored effort, and the response I got fell short of a denial:

“We don’t have anything to share on the record here.”

Twitter did warn us last month that it would be running more experiments on a regular basis and that we should expect to see some odd and new things on the service. Given that statement, my assumption is that Event Parrot is indeed a real service provided by Twitter.

“In recent months, that trend has picked up –– so much so that it’s rare for a day to go by when we’re not releasing at least one experiment,” Twitter’s Alex Roetter said. “We … experiment with features that may never be released to everyone who uses Twitter … they help us decide what not to do –– which is important as we work to keep Twitter simple while improving the user experience.”