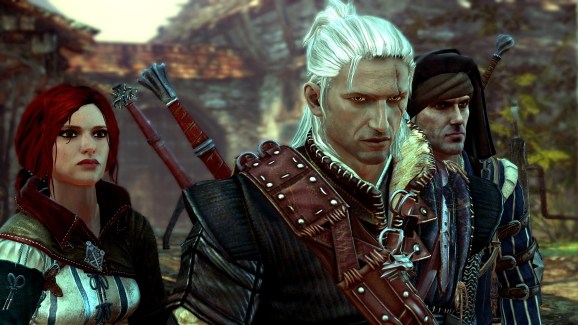 Geralt in The Witcher.

The white-haired hero/anti-hero of developer CD Projekt Red’s The Witcher role-playing-game franchise is getting his own funny book thanks to Dark Horse.

The comic-book publisher revealed today that it is working with CD Projekt Red to explore more of The Witcher’s lore, characters, and world. Dark Horse hired Bandette writer Paul Tobin and Lobster Johnson artist Joe Querio to manage The Witcher in his new comic-book form. Artist Dave John (100 Bullets) will create the covers for the book.

“We’re very happy to be working with Dark Horse Comics, which is one of the biggest and most interesting comic book publishing houses in the world,” CD Projekt Red studio head Adam Badowski said in a statement. “What makes it even more exciting is the fact that, for many of us, the Dark Horse logo has near legendary status — standing for classic characters such as Hellboy or Usagi Yojimbo. We’re very happy to be once again expanding The Witcher universe.”

The Witcher titles are fantasy RPGs that put players in the role of the warlock Geralt. The game series comprises two previously released titles. CD Projekt Red released the first game, The Witcher, in 2007 for PC. The second title, The Witcher 2: Assassins of Kings, hit PC in 2011 before making its way to Xbox 360 in 2012.

As a game series, The Witcher is well-regarded for its gorgeous visuals and interesting story.

“We’re very excited to work with CD Projekt RED on The Witcher,” Dark Horse director of custom programs Nick McWhorter said. “With the rich world they have created, and an enthralling central character like Geralt, we feel The Witcher is ripe to tell a compelling story through comics.”