Season 1 of developer Telltale Games’ The Walking Dead was our pick for best game of 2012 and was a heart-wrenching, intensely emotional experience. Nobody would envy the project that would have to follow it, and that place falls to The Wolf Among Us, based on comic-book writer and artist Bill Willingham’s Fables series. The game adaptation is out now on Xbox Live Arcade, PC, and Mac OSX and will be out on the PlayStation Network on Oct. 15.

Due to the identical controls and comic-book roots, comparisons between this title and its undead-crazed predecessor are inevitable, but The Wolf Among Us, which places players in the role of Bigby Wolf, a sheriff tasked with keeping a town of fairytale and storybook characters (known as “Fables”) in line, establishes itself as a distinct and often superior experience.

And it has a run button, so that’s a nice addition, too.

The Wolf Among Us quickly establishes itself as a pulpish detective story, but it’s hard to tell from the game’s vivid color palette. It maintains a stark contrast between light and shadow that calls back classic films noir from the ’40s and ’50s , but rather than playing with shades of black and white, Wolf’s lights are vivid yellows and greens, and its shadows are rich blues and purples. It’s often beautiful just to look at, and its bright comic-book color choices make an interesting counterpoint to the countless dangers that lurk in every pretty shadow of the game’s world.

During my playthrough of Episode 1, Bigby got into two fights and a foot chase, and I made my way through them with a series of quick-time events. This could either be really exciting or supremely boring, but Telltale manages to keep them interesting through pacing and variety. The prompts come fast (but not unfairly so), and every once in a while, players will have to target a specific area on their opponent’s body before they can make the obligatory button press.

The combination of twitch-style dodges and slightly more directed reticule action add up to sequences that kept me engaged and paying attention instead of just waiting for the next giant button to pop up on the screen. And it’s forgiving; the game allows a few mistakes without forcing a complete failure, and the targeting sections don’t require pinpoint accuracy to succeed. It all adds to the tension and desperation of actually being in a fistfight or a chase. And yes, I do know from experience, but now is not the time for those stories.

As for the fights themselves, they are brutal. One character comments about how tough it is to kill a Fable, and that means that characters crash through upper-story windows, lose limbs, and get axes where they ought not be and then get up to do it again later. I cringed several times (in a good way) at what my latest button press had made Bigby do, and every broken limb and structurally compromised head was another thread in my tapestry of winces. 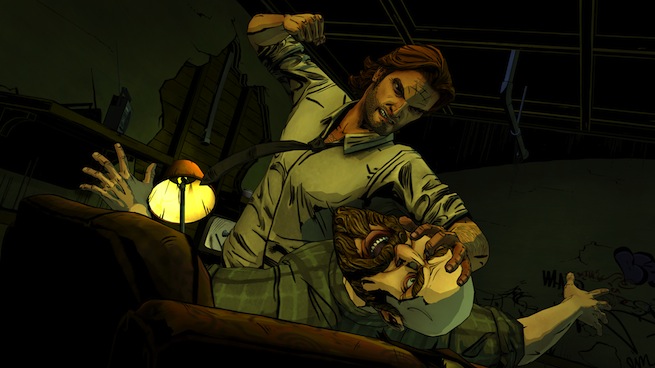 Above: Bigby and the Woodman are not on the best of terms. Probably because of that incident where the Woodman cut Bigby open to rescue Red Riding Hood and her grandmother and then filled his hollow abdominal cavity with stones. Or maybe it was something else; it’s not really clear.

Like The Walking Dead, The Wolf Among Us bombards players with choices in every scene. Are you nice or mean to this character? Which of two crimes do you investigate first? Two suspects are fleeing in opposite directions: Which do you pursue?

Unlike The Walking Dead, however, the consequences of my choices felt like they carried actual weight. At one point, I had to choose between two places to go. I picked one and didn’t find out until the end of the episode that this resulted in the death of a character that I might have saved if I’d taken the other option. This did not feel like The Walking Dead’s parade of unavoidable deaths, The Wolf Among Us seems to introduce real cause-and-effect to its most important decision points.

At one point late in the game, I made a heat-of-the-moment choice during a fight, and it had major consequences for my opponent. While Bigby didn’t share my self-reproach, I knew that I’d done something serious, and I’ll play through the rest of the series waiting for the fallout of that decision to hit. That’s significance, right there.

Bigby is a complete character

I know that sounds like a good thing, but hear me out. Most of the appeal of Lee, hero of The Walking Dead, is that he is whatever we want him to be. Bigby, on the other hand, has a past that we’re aware of even if we haven’t read the comic series. In contrast to the moral ambiguity of Lee’s past, the game and book firmly establish Bigby as a former villain trying to go straight, and so many of the decisions I made about his demeanor felt like little more than flavor I was adding to an already existing character. I didn’t really feel like I was defining Bigby as I had Lee because the character existed long before I started controlling him.

The Wolf Among Us is off to a great start with this episode. The characters are interesting, the writing is sharp, and the story switches effortlessly between thoughtful investigation sequences and more action-heavy scenes featuring some of the most effective quick-time events I’ve seen in a while. I haven’t read a single issue of Fables, but this two-hour chapter was enough to get me fully invested in its world.

The Wolf Among Us Episode 1: Faith is out now on Xbox Live Arcade, Steam for PC and Mac and will be out on the PlayStation Network on Oct. 15. The developer provided GamesBeat with a free Xbox 360 download code for this review.