Pokémon X and Y, the newest installments in Nintendo’s long-loved series of monster-collecting and battling, came out today for the 3DS, but don’t just haphazardly run into your new quest to catch them all! We’ve put together this list of tips to help you on this new adventure. You’ll find some useful info, plus the locations of a few secrets, that’ll ensure you’ll become a Pokémon Master faster than you can say “Pikachu.”

Plan ahead when picking your starter

Just like its predecessors, Pokémon X and Y let you choose between a Fire (Fennekin), Water (Froakie), and Grass-type (Chespin) for your first party member. However, each one also adds a second affinity when they reach their third and final evolution. Fennekin’s (Delphox) is also Psychic-type, Fraokie’s (Greninja) gets Dark, and Chespin’s (Chesnaught) adds Fighting-type.

So keep that in mind when you start building your party. You don’t want to waste time raising a Psychic Pokémon when your Fennekin is already going to cover that role for you down the road.

Be careful with the first gym

The first gym leader you fight, located in Santalune City, specializes in Bug-type Pokémon. This means that anyone who picked the Fire-type Fennekin as their starter should have an easy time since Bug is weak against Fire, right? Except that the gym leader’s first monster also has some Water-based moves. So if you started the game with a Fennekin, either make sure he’s strong enough to survive that first Water attack or have some backup ready. 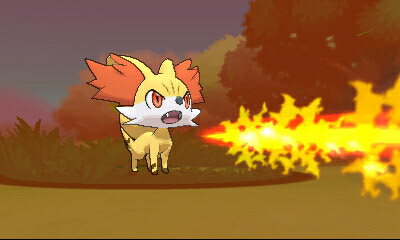 Above: The Fire starter Pokémon, Fennekin.

In past games, the Exp. Share was an item that you could give a specific Pokémon to hold on to. That critter would then earn experience even if it didn’t participate in a battle. The item works differently in X and Y. The Exp. Share is now a Key Item that you can turn on and off. When turned on, it spreads experience around to your entire party, with those who actually participated in the fighting getting a little extra.

Once you have your party of six set, turn the Exp. Share on. It’s a great way of making sure that all your Pokémon level up evenly, and it can also help catch up weaker party members without having to constantly switch them in and out of battles.

The boutiques are your only way of getting new clothes for your avatar, and their stock changes daily. You can find them in the following cities: 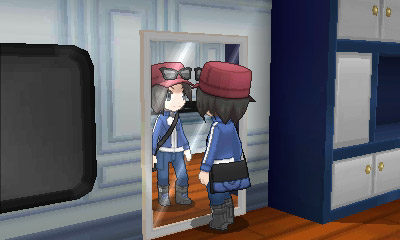 Above: “I think that’s how sunglasses work … .”

Finding the Moss Rock and Ice Rock for Eevee evolutions

Just like in past installments, you need to level up your Eevee while standing next to a Moss Rock or Ice Rock if you want a Leafeon or Glaceon. In X and Y, you’ll find the Ice Rock first in the deepest part of the Frost Cavern. Don’t worry: The whole cave isn’t that big, so you should find it easily enough.

You’ll find the Moss Rock closer to the end of your quest to beat the Elite Four. It’s on Route 20, between Snowbelle City and the Pokémon Village. Just enter the area from Snowbelle, and you’ll see it right away.

Speaking of the Pokémon Village, this is also where you’ll find the legendary Mewtwo. Just cross a small stream using the Surf HM on the western side, and you’ll come across a cave entrance. Mewtwo’s waiting right inside, so you don’t need to explore a long dungeon before you can fight him. At first, a man blocks this entrance, but he disappears once you beat the Elite Four.

Mewtwo is level 70, so you’ll either want to use a Master Ball to ensure an easy capture or make sure you’re stocked up on Ultra Balls and ready for a long fight. As soon as you capture him, you’ll also get the special stone you’ll need to activate Mewtwo’s Mega Evolution. 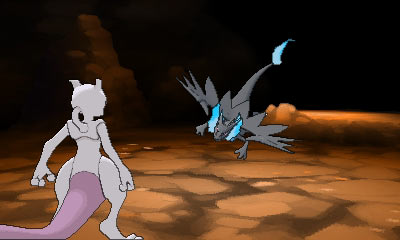 Above: I’d put my money on Mewtwo.

Xerneas is the legendary Pokémon who adorns the cover for the X version, while Yveltal serves as the mascot for the Y version. Of course, going by series history, you had to guess that there’s probably another legendary Pokémon that’ll someday represent a future Z version. And indeed there is! You’ll find him, Zygarde, buried deep inside the Terminus Cave located just off of Route 18.

The Terminus Cave is one of the game’s longest dungeons, so make sure you’re stocked up on healing items and strong Pokémon before you set off. Like Mewtwo, Zygarde is level 70, so this is another instance where you might want to use your Master Ball. He’s dual Dragon and Ground-type.

Want to catch a lot of Pokémon? Then have a lot of friends

After you beat the Elite Four, you can go to Kiloude City and access the Friend Safari. For each friend code you have registered, you can go on a different safari that gives you the chance to catch specific Pokémon. The variety increases if your registered friend also plays Pokémon X and Y.

The Friend Safari is a quick and easy way to fill out your Pokédex, so make sure you have a lot of friend codes registered on your 3DS.