Venerable photo-sharing site Flickr, which massively revamped its interface earlier this year, has gone one step further. Now, the pictures are even bigger, and the details are off to the side.

As, arguably, they should be.

Flickr’s redesign in May made the photo site much more visual, with a massive focus on making pictures in your photostream as large and impressive as possible, while stripping the rest of the interface down. That is pretty much exactly what Flickr is now doing with individual photo pages.

Essentially, what Flick is doing is making the photo as large as possible, while pushing the interface detail — whose photo, how many views, photo description, comments, sharing options, and so on — off to the side. The result is a much cleaner, more arresting portrayal of your images.

“With the new photo experience the image is about 25% bigger than on the previous photo page,” Flickr said in a blog post. “You’ll see more pixels, get a cleaner view without any elements on the top or the bottom of the screen, so that photos can really be the center point.” 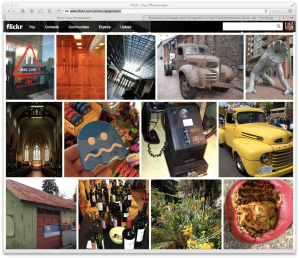 Previously, if you wanted information about the photos you were viewing on Flickr, you likely needed to scroll the page down to find the title and description, as well as any comments. With the new full-screen version, that information is visible without scrolling, even though the photo itself is bigger.

Even though the photos are bigger, however, Flickr says it’s using “new technology” to make the photo viewing and navigating process faster. That’s an important point, because one of the critiques of the new Flickr from the site’s long-time loyalists was that the site took too long to load.

It will be interesting to see how Flickr’s users respond to this new change.

Even though the spring update increased site traffic and uploads, according to a company representative I talked to, many of the site’s long-time users rebelled viciously against the change, preferring the old, familiar site.

This new update is more of an evolutionary step than a major overhaul, however, so it may meet with less resistance.