SAN FRANCISCO — Adidas is taking the smartwatch craze and running with it.

The popular sports brand announced today that it is coming out with a smartwatch of its own, entering the increasingly competitive arena of wearable devices.

“Adidas has a long history of helping athletes perform better, beyond making great shoes and shirts,” VP of Adidas Interactive Paul Gaudio said on stage at GigaOM Mobilize. “We came to this idea of delivering service and serving athletes through technology. Our intent is not to compete in the smartwatch space — we are not trying to make a smartwatch, but the smartest running watch.” 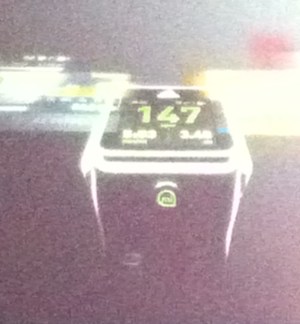 Gaudio said the goal is to provide a real-time personal coaching and training plan. Adidas spent a lot of time considering which sensors and services are crucial for runners and which aren’t. The $399 watch tracks how far and how fast a runner goes with GPS sensors. The technology incorporates data about your fitness level and goals with information on your current and target heart rate, and personalizes training plans accordingly.

It also connects via Bluetooth to headphones, so runners get coaching through visual or physical prompts on the device and can listen to music.

The wearable device craze continues to get crazier — Samsung recently came out with its highly anticipated Galaxy Gear smartwatch, and then there is the NIKE fuel band, Pebble Smartwatch, Fitbit, Jawbone Up. And Apple, Google, and Microsoft are rumored to have plans for smartwatches of their own.

Gaudio said the market right now involves devices, such as Samsung’s, that basically act as a second screen to a mobile device. They are connected to smartphones and tablets and come loaded with a camera, apps, call logs, social media integration, and Internet access and are clunky as a result.

Then there are fitness-focused competitors, such as NIKE, which yesterday announced its latest FuelBand that can track multiple sports. The Jawbone UP and FitBit One are also geared towards tracking your everyday life, not just you athletic activity. They track your steps, sleep habits, and give you an estimate of calories you’ve burned.

Adidas is taking a “less is more” approach and designed the watch with a tight focus on what serious runners want.

“We didn’t incorporate anything in here that a runner didn’t need or appreciate in their lives,” Gaudio said. “We left certain things out on purpose. Runners get to a point where they don’t want to be bothered to carry a phone. One of the reasons people run is to de-stress and get away. Leaving extra capabilities out was deliberate and intentional.”

The idea is that it’s just you and the open road. With other, more wide-reaching and flexible offerings out there, Adidas aims to carve out a niche with serious runners. Its is a fairly small market to target. Like Adidas sneakers or shirts, the watch aims to be part of your athletic life and doesn’t have much use outside of that realm. For $399, it may be a tough sell to mainstream consumers. Even the ones that love to run.

Adidas developed the smartwatch together with Fjord, a high-end design firm that Accenture acquired earlier this year.