With a goal to bring the cloud to specific industries, Ritter’s firm, Emergence Capital, invested $4 million in Veeva Systems in 2007. By 2010, Veeva had already reached profitability, and it had won over almost 100 customers in the life-sciences sector. Today, the company made a strong debut on the public markets, selling nearly $261 million in stock Tuesday at an initial valuation of about $2.4 billion. 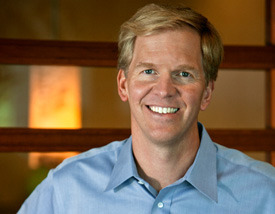 Above: Emergence Capital’s Gordon Ritter is feeling good about his firm’s investment in Veeva Systems.

Emergence, Veeva’s biggest investor, will have a stake worth $1.2 billion, roughly a 300-fold return on its original investment.

In an interview shortly after Veeva rang the bell at the New York Stock Exchange, Ritter hinted that this may be one of the most successful institutional investments in a cloud company to date.

“Marc Benioff [Salesforce’s chief executive] led the first wave of cloud computing, and there have been a series of leaders like him spending plenty of money to grow their businesses,” said Ritter. “Peter [Gassner, Veeva’s CEO] is leading the next wave, which is focused on industries and real customer successes.”

While Salesforce develops business software for a variety of industries, Veeva focuses on the highly regulated health care sector. Its specialized set of tools are winning over big pharma because they can track prescribing habits and comply with industry regulations.

Veeva currently has 170 large enterprise customers, including Pfizer, and the company has netted $27 million in profits over three years. About 35 percent of its revenues come from international markets.

“We noticed that these customers were stuck on client server software, [but] I thought they would adapt to the cloud quite quickly, as they have businesses to run,” said Gassner. “It was pretty logical.”

Analysts are impressed with Veeva’s execution to date, especially given the constraints of operating in one industry. “It is interesting that a vertical specific play like this is trading up with the horizontal software as a service players,” said analyst Jim Moore, the president and founder of technology mergers and acquisitions firm J Moore Partners. “This company has a validated business model with real operating profits and has been very capital efficient.”

Veeva may be one of the stealthiest company in Silicon Valley. We rarely heard a peep from this startup in its early years. Veeva’s management team did not court venture investors, and it didn’t raise additional rounds of capital. It didn’t need to.

Most cloud companies raise significant capital to offset heavy operating losses, like sales and marketing. As a result, the majority of the horizontal SaaS companies (those who followed Salesforce’s model) were not profitable by the time of their initial public offering. In recent months, we’ve seen RocketFuel, RingCentral, and many others go public before reaching profitability.

With all the money it raised at the initial public offering, Gassner plans to rapidly expand the team, and open more more international offices.

Gassner told me by phone that the company will also expand the product to incorporate more data and analytics. By tracking usage of cloud applications, “you can crowdsource data that is very critical to the Life Sciences industry,” said Gassner. “That data can help our customers be most efficient.”

In the wake of Emergence’s massive return on investment, we will see more investment in cloud companies targeted to specific verticals. Massive sectors like real estate, health care, education, and government are all ready for cloud offerings.

“We believe the next fundamental wave in the cloud is firms that are focused on verticals,” Ritter told us back in August, which prompted further analysis. That sentiment is already ringing true.