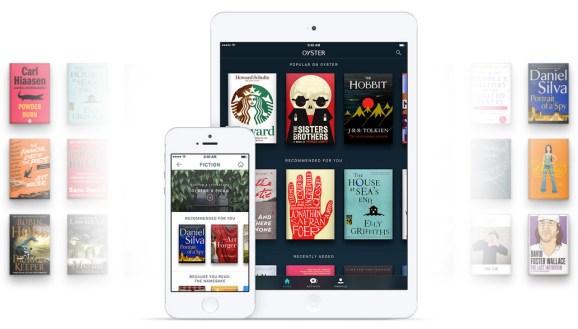 Oyster hopes you’ll binge on books the same way you gorged on the last season of Arrested Development.

This morning, the e-book subscription company opened to the public — no more invites necessary. It also launched an iPad app, which features a dark user interface that’s ideal for nighttime browsing (it certainly looks pleasant at a glance). Previously, the app was only available on iPhone, which probably turned off some serious readers.

Oyster offers access to a library of more than 100,000 in-copyright e-books for $9.95 a month. To get readers hooked on the service, it’s now offering a one-month free trial, much like Netflix (and basically every other subscription service).

Oyster competes with Scribd’s e-book service, which has been up and running since January. But two weeks ago Scribd launched a full-fledged subscription service for $8.99 a month and announced a partnership with HarperCollins — one of the five major book publishers — that gives Scribd access to the majority of the publisher’s back catalogue. Scribd also offers support for Android devices.

Oyster raised a $3 million funding round led by Founders Fund last November. It also offers some HarperCollins titles, but not as many as Scribd.