Book publisher Random House has expanded its foray into the video game market with a new mobile game called Catch the Berry. The title shows that big brands are increasingly attracted to the mobile game business as a way of remaining relevant to their customers. But even for a big company, it can still be tricky starting from scratch in a brand new market. 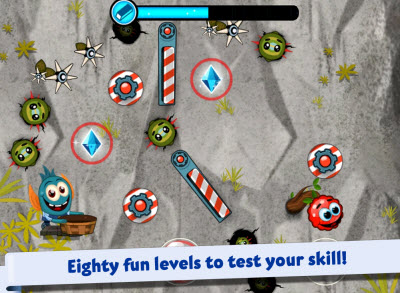 Above: Catch the Berry lets you draw lines with your finger.

Catch the Berry is a simple title where you draw a line on a touchscreen, drop a berry on it, and let it fall and knock things over. The game was made by the Smashing Ideas game studio, a division of Random House. Seattle-based Smashing Ideas had been making eBooks and other interactive apps on a contract basis for Random House, so the parent firm Penguin Random House acquired the studio 2.5 years ago.

Smashing Ideas has been making games for 16 years, working on hundreds of different titles. But chances to create its own original title have been rare, said Chad Otis, executive creative director, in an interview with GamesBeat. The parent firm asked the company to come up with an original game, and the studio jumped at the chance.

“One of the reasons they bought us was to be more innovative and relevant in the digital entertainment space,” Otis said.

The company did a brainstorm and came up with 17 ideas. It pitched Random House and narrowed the list to four ideas. It then focused on an idea originally known as Finger of Fate, a game about saving villagers from an angry volcano god. The idea and story evolved into Catch the Berry.

The team built the paid-download puzzle game in the Unity Engine. It built prototypes that focused on the game mechanics of physics, real-time line drawing with your finger, and tilting. It has real-time line drawing, with free play that offers multiple ways of solving the same puzzle. What makes it different is that you can draw or erase lines in real-time to alter the berry’s path.

“Everyone reacted well to the prototype once we had those features,” Otis said. 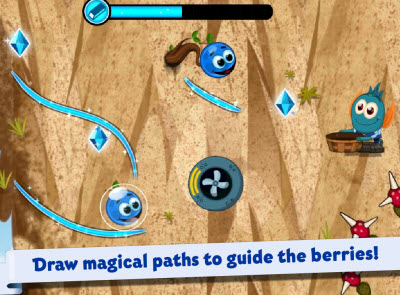 Above: Catch the Berry

It took about five months to complete the game with a core of four employees. A larger group contributed during different parts of the project. Full told, it has 80 levels.

If the game is successful, Smashing Ideas will support the title as a service. But it will also revisit some of the other original ideas it created.

One of the good things about working for a giant company is that it will be easier to get Catch the Berry noticed. Random House will step up with PR and marketing.

“You have to get them noticed these days,” he said. “You make the game, and the other half is getting it noticed.”

The core mechanics are not so different from Disney’s Where’s My Water series, where you make water flow by cutting lines in dirt. It also resembles Cut the Rope in its use of physics.