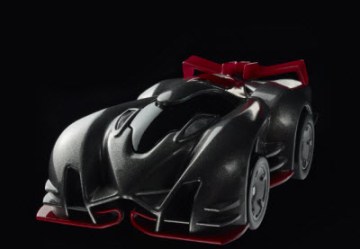 Anki was born six years ago from frustration with the failures of robotics. The company’s founders were robot experts at Carnegie Mellon University, and they saw that most artificial intelligence applications came from the government and industrial sectors. But few robot applications succeed in consumer markets.

The company hopes to change that with Anki Drive, a slot car-racing game where the cars are smart. Boris Sofman, the chief executive of Anki, believes that the future of consumer robotics has finally arrived with this cool consumer product.

With Anki Drive, you roll out a mat on the ground that serves as a race track. You can place two cars down on the track that will start driving around on their own. Then those vehicles will adapt and learn how to compete better. You can then control the game through the iOS app, which enables you to steer the car and fire vehicle weapons. While the cars can keep themselves racing around the track, you can make them do tight or wide turns.

Sofman teamed up with two fellow graduate students, Mark Palatucci and Hanns Tappeiner, in the doctoral robotics program at Carnegie Mellon. They took years to perfect their technology so they could create smart race cars that can race as well as a human. 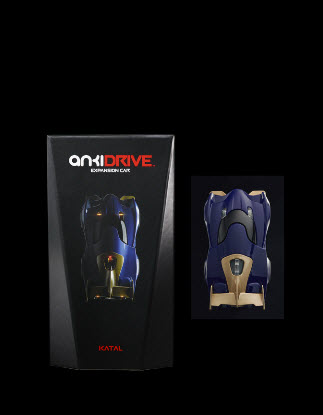 “There’s an emotional connection you can have when you can hold something in your hands,” Sofman told GamesBeat. “Look at the way people hold their teddy bears. They’re mostly static objects. They’re inanimate. Compare that to video games, which have taken advantage of A.I. and are so fun and engaging. We saw an opportunity to use robotics and A.I. to bring physical characters to life to create a new entertainment experience. It combines the magic of video games with the emotional connection you get from the physical world.”

The idea was a hit with Apple — so much so that Apple chief executive welcomed the San Francisco-based Anki team up on stage at the keynote for Apple’s Worldwide Developer Conference in San Francisco this summer.

The mat has an ink that is embedded with a code. That tells the car where it is on the track and where it is relative to other cars. Each car also a tiny camera under it that can read that information. (Yes, this is why the game costs $200.) The cars have a 50-megahertz processor, a multicolor LED, and Bluetooth low energy radio to communicate with the smartphone. Anki says the cars can drive so precisely that the real-world equivalent would be driving down a highway at 250 miles per hour with a tenth of an inch clearance on either side.

“If those cars weren’t so precise, the A.I. wouldn’t be able to work as well,” Tappeiner said in an interview.

You can eventually use the free iOS app to build the character of the car. The cars are able to pass up each other, block opponents, or nudge a rival. And they do so by thinking on their own. The game comes with two cars, one named Kourai and another called Boson. You can buy other cars for $69 each.

At the end of the game, each player gets points he can spend to upgrade his cars. Those upgrades are permanently installed on the physical cars. So you will have those upgrades wherever you take them.

Anki Drive works with the iPhone 4S and up, the iPod Touch (fifth generation and up), the third-generation iPad and up, and the iPad Mini. The starter kit and the expansion cars go on sale on the Anki website and Apple stores starting Oct. 23.

Anki Drive was formally incorporated in 2010, after years of research. The company’s backers are Andreessen Horowitz, Index Ventures, and Two Sigma. The name Anki means to “learn by heart.”

Sofman said that Anki Drive wouldn’t have been possible five years ago. The 3-inch cars were designed by Harald Belker, the creator of iconic film vehicles like the Batmobile, the vehicles in Minority Report, and the cars in Tron Legacy.

The company has 45 people and has raised $50 million to date in two rounds.