Regardless of your feelings on skeuomorphic design, mobile app makers are rushing to bring their products in line with iOS 7’s flat user interface. The latest reboot is Roambi, a mobile-only data visualization and content publishing app from eponymous developer Roambi (formerly MeLLmo).

With Roambi Analytics 7, the main focus for Roambi was a complete visual reboot that adheres to Apple’s new aesthetic.

The updated version of the app, which launched today, takes your data (from spreadsheets, HTML tables, CSV files, and CRM reports) and visualizes it as interactive graphs and charts. In total, there are 11 data visualization options — all of which are flatter. Only some are pie-shaped.

“Taking cues from iOS 7, Roambi Analytics 7 features a complete redesign of the entire Roambi experience from front to back and top to bottom,” Roambi president of product innovation Quinton Alsbury told VentureBeat. “Our goal is to continue our never-ending quest to make data as accessible to as many users as possible through the fundamentals of making it simple to get, fun to use, and easy to understand.” 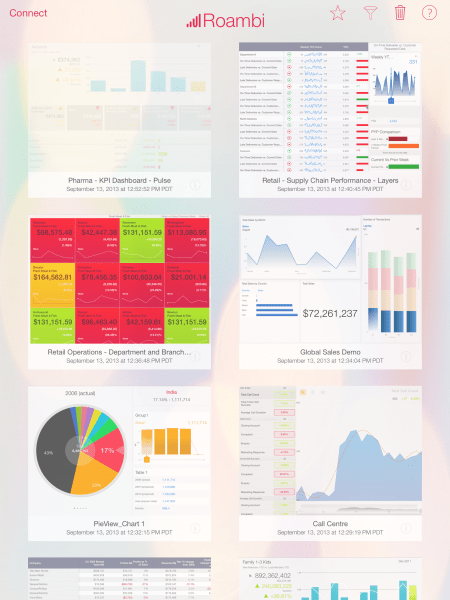 Above: A screenshot from Roambi Analytics 7

Alsbury said Roambi has been working on the app since June, when iOS 7 was first announced. But even though there’s value in quickly optimizing for iOS 7, the company wanted to give people a chance to get used to the operating system before releasing the new version of the app.

The one major addition to Roambi in this new version is the “Card View,” which enables you to stuff a bunch of items — charts, tabular data, individual metrics — into a single, interactive dashboard.

Roambi currently has 90 employees. It has raised $50 million in funding, including a $30 million round from Sequoia Capital in September 2011. Its customers include Airbnb, Pret a Manger, Sydney Airport, and the Dallas Cowboys.