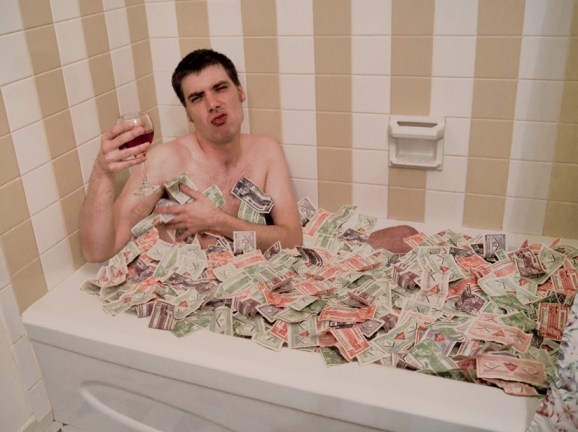 What else can you do with all that money but bathe in it?

My image of the typical software engineer now includes someone splashing about in a bathtub full of money.

Glassdoor released the results today of a survey about the top 25 highest paying companies for software engineers, and they all pay six-figure salaries.

The top paying employer is not Facebook, Google, or Twitter (although they are in the top 10). Juniper Networks pays its software engineers the most. Their average base salary is an impressive $159,990 — more than three times the average income of the rest of the population.

The national annual average for a software engineer’s base salary is $92,790, and all of the top 25 companies pay above this amount. Seventeen of the top 25 highest paying companies are in the San Francisco Bay Area. The region has the highest base developer salary in the country, with an average of $111,885.

My intuition that I should have studied computer science instead of literature and modern art is again reaffirmed.

Throughout the U.S., 15,732 employers are hiring software engineers. No wonder they make so much — the skills are in high demand. The San Francisco Bay Area leads for the most employers currently hiring engineers, with 3,846. In New York City, 2,246 employers are hiring developers, and Washington D.C. has 2,139 companies on the hunt for rare coding unicorns.

Glassdoor tracked more than 33,000 salary reports from over the past 12 months, comparing salary and hiring across 20 major U.S. cities, to compile this data. The results have shifted from the report last year, when Google software engineers earned the highest based salary of $128, 336, followed by Facebook, Apple, eBay, and Zynga. Interestingly, the top two companies from this year weren’t even in the top 15 last year, and Apple, eBay, and Zynga dropped out of the top five. Zynga isn’t even in this year’s top 25.

Now if you’ll excuse me, I have an “Intro to Computer Programming” book to track down.